Developments on site at Boksto

Steeped in history, Boksto 6 is a mixed-use complex in the centre of Lithuania’s capital city Vilinius. From its bygone era of the 15th Century, this site has undergone a range of uses. In its most recent history, the site served as the Vilnius City Skin Hospital until falling into disrepair during early 2000.  Boksto 6 is now deemed a UNESCO designated World Heritage Site and overlooks one of the oldest streets in the historic centre.

With such a rich, varied and protected history, our conservation and restoration concept became crucial: any new build should be a confident and carefully considered insertion into the existing fabric of the site, and where possible the historic elements of the site should be restored and preserved. The concept combines restoring the baroque and gothic buildings to its original state, whilst embracing the scars and the aging of the buildings as a natural asset.

Vacant since 1999, we have sought to rejuvenate the derelict site and its surroundings by creating a mixed-use space.  The scheme includes a performing arts space, jazz bar/restaurant, spa, residential and office accommodation, an underground car park and landscaped gardens. The inner courtyard is designed to be the main public space adjacent to which is a performance space and restaurant, animating the complex and creating a destination for the city. The scheme aims to be a cultural location that celebrates its historic past together with its renaissance.

The existing baroque and gothic framework is the most valuable asset of the complex, and so we aim to reinstate it to its original form, with new builds respecting the sites historical foundations by following a ‘box-in-box’ approach.  The new build additions aim to reinforce the unity and balance of the overall complex whilst still juxtaposing the new and the old. These elements, while uncompromisingly contemporary, are considered insertions that aim to evoke rather than replicate the sites historical fabric. 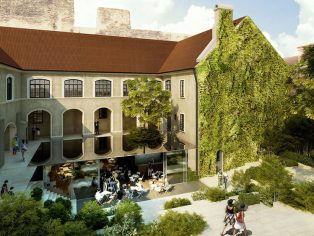 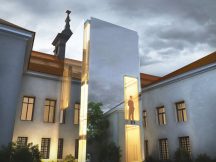