The designs of eight bespoke camping huts that will offer a luxury retreat to travellers in Wales have been revealed.

In a project celebrating Wales’ Year of Legends 2017, seven UK architecture practices and an Australian design studio were selected to create bespoke pop-up cabins inspired by the Welsh mythology and nature.

The eight huts, scattered across three ‘secret’ locations in Wales, will feature hotel-style amenities for adventurers wishing to explore the great outdoors.

Newcastle Emlyn-based Rural Office for Architecture and Aberystwyth-based Timber Design Wales were the only Welsh practices whose designs were chosen, while submissions from London’s Barton Willmore, Waind Gohil + Potter, How About Studio, Francis & Arnett and Miller Kendrick Architects were also selected. Sydney-based TRIAS also made the cut.

The huts are expected to be completed by April and available for rent in the summer. They are part of Epic Retreats – a project that is a partnership between Best of Wales, Cambria Tours and George + Tomos Architects and is part-funded by the Welsh Government’s Tourism Product Innovation Fund.

Best of Wales director, Llion Pughe, said: “Our passion for Wales and its history has provided a great source of inspiration for this project and we look forward to giving guests the opportunity to wake up to Wales in the country’s first ever boutique pop-up glamping hotel.”

This design is inspired by the legend of King Arthur and a cave where he and his knights slept while travelling – it is said it could be discovered once but never again. Locally sourced sheep’s wool insulation will be placed within the panels to provide a high level of thermal insulation and the build benefits from a full width sliding door to offer panoramic views of the Welsh landscape.

This unusual structure is inspired by France’s failed attempt of a British invasion through Fishguard back in 1797. It is said that as the French began their assault, hundreds of local Welsh women came to witness the fighting between the French and the local militia. Dressed in their traditional scarlet tunics and tall black hats they were a formidable sight and at a distance may have been mistaken for British army Redcoats – suffice to say the French didn’t stick around for long. A king-sized bed fits within the upper floor of the hat and the domed roof allows for stargazing opportunities.

Cabin in the Woods by Francis & Arnett

This nature-inspired building sits on legs high above the ground and explores the theme of the ‘animated forest’ shaping the Welsh landscape. Inspired by the poem Cad Goddeu, meaning ‘battle of the trees’, from the medieval Welsh manuscript known as the “Book of Taliesin” the unit will be developed to give the impression of movement. Its highlights include a padded sleeping area and a stove area with featured chimney above, as well as a box window designed to catch the morning sun to wake travellers naturally. It will use raw materials derived from the Welsh landscape including timber, steel, slate and leather.

Inspired by the legend that is the Welsh dragon, this eye-shaped pod could fool passers-by into thinking such a creature was hiding in the great outdoors. The walls will be covered with recycled plastic cut in the shape of a dragon’s scales. And the cabin features a wet room and wood burner for cooking and heating.

This vertical unit celebrates the best Wales has to offer. The three prongs represent the dragon’s foot, the overall design is inspired by Wales’s famous industrial past and the steel door displays the country’s iconic Celtic knotwork. The layout features a sleeping area upstairs and panoramic glazing at both levels provides for magnificent views across the Welsh landscape.

Miner’s Hut by How About Studio

A tribute to the Wales’s mining industry, the cabin has a small tunnel through which visitors crawl into an angular corridor space. From here they can follow a glow of light from the main space which extends to the full available height with large windows that provide scenic views of the great outdoors beyond. Visitors must return into the tunnels to discover the washroom and to climb a flight of steep steps to the sleeping area, from where they can enjoy panoramic views from their bed.

As a country, Wales has the highest percentage of sky designated as an ‘International Dark Sky’ area making it one of the most outstanding places in the world to stargaze. The Sky Hut is designed to provide a unique place to experience the sky, taking its inspiration from Cadair Idris where legend states that travellers sleeping out under the night sky awaken as madmen or poets.

The tradition of sleeping out under the night sky is manifested in the roof with a simple geared cable system; borrowed from proven sailing technology, allowing it to open fully. With the doors open too, the Sky Hut can be configured as a glamping-observatory.

This cabin is based on the material Wales is built on, and of – slate. The cabin is a single room with a bathroom tucked behind. A kitchen and built-in table frame make up the sitting space, while the bed sits on a raised platform – at one end, this platform pulls back to provide space for a seat and desk. 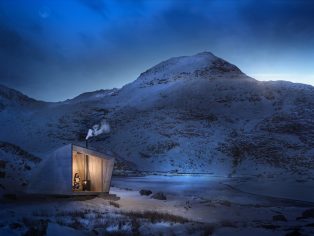 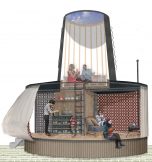 Miner’s Hut by How About Studio 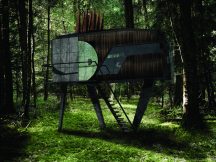 Cabin in the Woods by Francis & Arnett 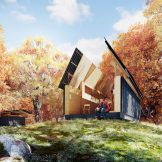