Designs for the new O’Hare Global Terminal and Global Concourse were presented at the Chicago Architecture Centre this week by five selected teams. The entries are on display at an exhibition opened by Mayor Rahm Emanuel of Chicago.

The new terminal will replace the existing 1960s Terminal 2, with ‘a cutting-edge global terminal that reflects the legacy of Chicago’s innovation, architecture and diversity.’ The joint venture led by Foster + Partners, Epstein and Moreno, has created a new vision for a gateway to Chicago that captures the city’s progressive spirit and its architectural legacy, while re-thinking the airport terminal for the next generation.

“This project brings two passions together, my personal passion for flight – for over forty years I have flown in and out of international airports as a pilot – and my love affair with cities. I remember coming to Chicago as a graduate and being captivated by the energy, the extraordinary location, the music the culture, and the outdoor sculpture – all of those influences blend together in our proposal.”

Departing passengers first encounter the three sweeping arches of the new terminal as they approach, creating a dramatic canopy over the drop-off. The arches then merge into a single curve as they enter the building, blurring the boundaries between inside and out and allowing the spectacle of the airfield to unfold, recapturing the romance associated with air travel. Nestled underneath the soaring roof, the column-free spacious volume is flooded with natural light. Domestic and international arrivals and departures are intelligently planned with direct routes, and every detail is designed with passenger experience at its heart.

These interior spaces are inspired by Chicago’s diverse neighbourhoods and in particular, the city’s emerald necklace, a democratic space that welcomes everyone. Our team has also collaborated with Dorchester Industries to provide the new Global Terminal with a curated arts program celebrating Chicago’s immense talent in the arts.

The unique roof structure is an emblematic element that binds the entire design together. Using cutting-edge technology, it is supported on its perimeter at just six points, creating a grand unified space that is designed to meet the ever-changing operational demands that are synonymous with airport terminals and new technologies.

“In 1991, we revolutionised airport design with Stansted. At O’Hare Global Terminal, we are creating another revolution – an extraordinary shell with a span of 550 feet, with views that create a direct visual relationship with the aircraft and a sense of orientation and drama, a space that truly lifts the spirits. It pushes the limits of technology to create a space that is generous, flexible, and points to the future.”

An exhibition of the joint Foster + Partners, Epstein, Moreno proposal, together with the other entries is on display at the Chicago Architecture Centre, 111 E Upper Wacker Drive. The public are invited to view the proposals online and vote for their favourite scheme: voteord21.flychicago.com. Voting ends on 23 January. 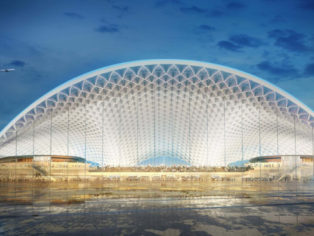