Foster + Partners newest project in Madrid was announced on 20th June – the comprehensive refurbishment of the Plaza Colón building at the heart of the city. Located at one of the most major intersections in Madrid, the project seeks to completely transform and revitalise the existing structure to create a new iconic landmark that reflects the prestige and importance of the site.

The site has great historical significance and is a key part of the long-term vision for the development of Madrid. Located on the junction of Madrid´s main north-south artery, Paseo de la Castellana, with Génova Street, the primary east-west axis of the city, the building faces the bustling Plaza de Colón, one of the largest public spaces in the city that is flanked by Spain’s National Library. Axis also marks the confluence of three different districts of the city: Barrio de Salamanca, with its luxury shopping and residences, Chamberí, the global financial hub combined with lively art galleries, and Centro the oldest quarter of the city, full of tradition.

“Situated at one of the most important intersections in Madrid, Axis is a new landmark for the city. It establishes a new vision for the existing 1970s structure, stripping it back to its essence and creating a flexible, future-proof building that will endure. Its striking facade will also nurture a new identity and sense of place for the city of Madrid.”

The four-storey building is characterised by its distinctive stainless-steel diagrid facade that gives it a strong visual identity. The optimised geometry responds to structural efficiency, minimising energy and material consumption. Shops on the ground floor draw pedestrians into the building, with the permeable building envelope ensuring maximum visibility, allowing daylight to flood in and creating a friendly and inviting experience. Responding to Madrid’s Mediterranean climate, the building features a soaring atrium that connects the retail at the base with the offices above, pulling the natural greenery deep into the building. The building is crowned by a sky terrace – full of greenery, light and life – for informal meetings and gatherings against the backdrop of the Plaza de Colón. An innovative screen made from catenary structures, planted with natural vegetation creates distinctive open-air rooftop experience – a rarity in Madrid.

The building has a flexible floor plan throughout, with the core with lifts, stairs and services focussed along the south facade. This affords a clear span throughout the rest of the floorplate, capable of accommodating multiple uses, from a single tenant to a multi-let floor. The building is naturally lit and ventilated with maximised floor-to-ceiling heights, and the design retains the existing structure of the building erected in the 1970’s, reinforcing the project’s innovative sustainable approach. 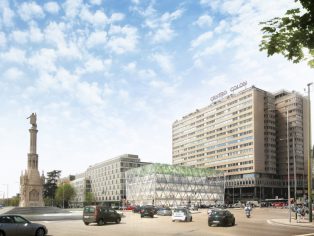 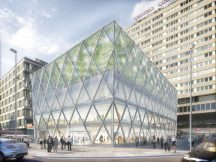