designjunction celebrates its most critically-acclaimed show to date

designjunction attracted 27,000 visitors to the cultural hub of London’s South Bank over the course of four days. Visitors came from across the world to see the exhibition with 81 visiting countries recorded, 53% of the visitors were from the UK whilst 47% were international.

‘This year presented a fantastic opportunity to bring designjunction right into the centre of London, interacting with the Thames. Thanks go to our exhibitors and partners, who did the location justice with a strong showing of product launches, installations and engaging talks. Notably, this year’s programme also addressed some of the key issues facing the design industry, including inequality and mental health.’ Will Sorrell, Managing Director, designjunction

The Riverside Walkway – Installations
On Queen’s Stone jetty, British designer Steuart Padwick made a dramatic change to the London skyline with his 9 metre high sculpture Head Above Water in support of mental health and the Mind campaign Time to Change.

On Oxo jetty, the city of Saint-Etienne – in collaboration with Lisa White, Head of Lifestyle and Interiors at WGSN, and designer François Dumas – showcased the Gateway to Inclusion, an immersive installation made out of multicoloured ribbons, which aimed to promote inclusion in design.

The Riverside Walkway provided a platform for Mud Shell, an innovative housing project that married ancient earth architecture techniques with the latest drone-spraying technology. Led by architect Stephanie Chaltiel, the project endeavoured to build a simple but sturdy and durable housing system that can be customised depending on the location.

Very Good & Proper, led by Ed Carpenter and André Klauser, celebrated 10 years of practical and beautiful products with a limited edition piece of art by Emily Forgot that takes inspiration from the brand’s entire portfolio.

Uruguayan designers exhibited for the third consecutive year, shining a spotlight on the concepts and products at the forefront of the country’s blossoming scene. Uruguay XXI captured the ambition and diversity behind this resurgent design landscape, securing Uruguay’s permanent place on the world design stage.

The Designers’ Dreamscape, designed by Brixton-based architecture practice Squire and Partners, hosted a talk on multi-sensory design with sound architect Tom Middleton and designer Tim Gledstone. They shared their insights into how and why incorporating transitional multi-sensory layers, such as sound and fragrance into the design of workspaces is good for creativity and communication.

A team of nine architects from Squire and Partners and guest mentor Mark Eley – founder of print studio Eley Kishimoto and Head of Programmes for Fashion and Design at Regent’s University – introduced free mentoring sessions for Part I/II architects from the Stephen Lawrence Charitable Trust in The Designers’ Dreamscape. The space was designed as a highly stimulating environment in which core design tools are unlimited, and people from all generations and backgrounds can meet, work and create together.

STILL, a restaurant concept by design consultancy and procurement specialists BY FORM, offered a setting for quiet contemplation in the bustle of the show, with a menu by Nordic inspired26 Grains.

In this section of the show, award-winning British designer Bethan Gray collaborated with whisky experts The Glenlivet to create an experiential celebration of craft in the form of a bar serving a specially created menu of food and cocktails.

The Bargehouse – Exhibitions and Talks
Across four floors of the Bargehouse, designjunction curated an inspiring programme of exhibitions including ’The Original. About the power of good design’ by Swiss furniture manufacturer Vitra, ’SOFT POWER’ by London-based industrial designer Tej Chauhan, the 2018Blueprint Architecture Photography Awards showcase as well as ‘Elements’, which demonstrated flooring creative Bolon’s commitment to sustainability and its new bio PVC collection.

designjunction’s talks programme featured more than 50 world-class speakers, who  discussed this year’s theme #designevery, celebrating design as one of the most powerful components in our everyday lives, with a focus on equality and diversity.

Next Stop
designjunction is delighted to announce plans for a new Christmas shopping show, The Gift Shop. Taking place in King’s Cross from 23 – 25 November, the show will present a curated mix of over 70 design-led brands selling a vast array of giftware including home pieces, fashion accessories as well as a select food range.

More details to be announced soon. 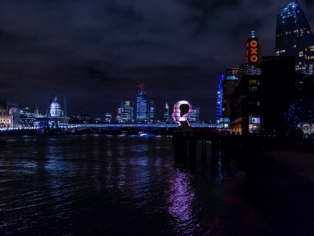 ’The Original. About the power of good design’ by Vitra, Bargehouse at designjunction 2018 | photography Ruth Ward