Formica Group has announced the winners of the competition, Formica® Formations. European design students were invited to explore and reinvent the concept of light using Formica® laminate.

The competition saw three winning designs selected out of 40 high calibre entries from 146 students across universities in France, Spain and the UK. Light Nest was awarded the top spot, followed by WAK, and Lilies. 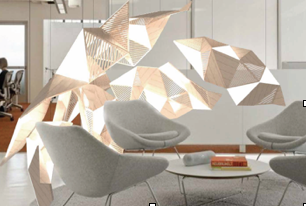