World Architecture Festival, the world’s largest international architectural event, has announced the category winners on Day Two of the event in Berlin.

Across a varied range of completed and future project categories, judges rewarded designs for an aquatic centre in Canada, a hotspring resort in China and a Shelter for Victims of Domestic Violence in Israel. The winners of these categories will now compete with the victors from Day One in front of the festival’s super-juries to be declared The World Building of the Year and Future Project of the Year.

Wingårdhs Arkitektkontor‘s sensitive design for the Nötkärnan private health clinic in Gothenburg, Sweden won the Health category. Focused on delivering care to the city’s Somali community, this new building features abundant colour and design flair, replacing an existing drab building on the site. Judges recognised it as a “clear, elegant solution that brings nature directly into the healing environment” whilst its “clever façade manipulation gives an illusion of depth.”

Monk Mackenzie Architects + LandLab’s #LightPathAKL project in Auckland, New Zealand won the Transport category.  Originally initiated when a study identified the potential of an unused former highway offramp to be repurposed to form the western route of an inner city cycleway and complete Auckland’s inner city cycle network, architecturally the project had to work simultaneously at two scales: the macro and the micro – the city and the individual. The category’s judges lauded the project as a “brilliant, fun intervention how human intercession into a car dominated environment offers a catalytic public space for cycling and walking.”

St Trinitatis Church in Leipzig, Germany, was awarded best Religious Building of the year. After suffering severe damage during WWII, the ruins of the original church were demolished in 1954, with the promised larger, permanent replacement taking over 70 years to materialise. However it seems it has been worth the wait, with this new project by Schulz und Schulz being lauded by judges as “an ingenious strategy centred around an open and engaging public space – a true urban church”.

Dutch architects MVRDV were victorious in the Shopping category, with the Crystal Houses project, which created an entirely transparent façade for the Chanel store on Amsterdam’s upmarket shopping street, PC Hooftstraat. Judges praised the architects for demonstrating “such invention and bravado by using cast glass blocks that build their own crystalline wall with the memory and reference of the traditional shop unit in the High Street.”

Zaha Hadid Architects is awarded the prize for Higher Education & Research for the Investcorp Building for Oxford University Middle East Centre. The smooth, steel tubular construction houses a new lecture theatre, library and archive at St. Antony’s College. Judges commented “Zaha Hadid expressed an architecture and form that allows the interior of the spaces to enjoy the view of the urban setting while cladding the building in a material that say ‘I am the future’”.

HCMA Architecture + Design triumphed in the Sport category for their Grandview Heights Aquatic Centre in Surrey, Canada. Through close collaboration with the local city authorities and diverse user groups, the practice arrived at a design that maximized glazing towards the street, activating the project edge and blurring lines between interior and exterior spaces.
The judges felt the project’s design “combined structural efficiency with an iconic silhouette” commending its wooden roof structure for “keeping clear of technical installation, allowing a very precise understanding of the overall space”.

The Fushengyu Hotspring Resort in Mianyang, China topped the Hotel & Leisure category. Aim Architecture‘s designs merged planning, architecture, landscape and interiors, shaping a total concept based on the land, water and nature of the local Luo Fu Shan mountains in Sichaun province. This spa building wraps around a hill at the centre of the site, overlooking the valley. Judges praised the project for creating “an unfolding sequence of atmosphere and experiences”, also noting that the architects’ choice of materials helps to “unite the differently designed elements” giving it the identity and feel of a village.

The Future Projects: Masterplanning prize was awarded to Arkitema Architects and karres+brands for the Nærheden ‘Suburb of the Future’ project, which judges extolled as “a replicable model for cities around the world”, commenting that it “brings together urban and suburban qualities in a legible, coherent and beautiful masterplan”. The first residents will move into this new city district in Greater Copenhagen in 2018.

South Melbourne Primary School represents the future of Education according to the World Architecture Festival judging panel. “An innovative and inspiring vertical campus, we believe it will be a great learning environment in a highly dense new development area”, they said of the design by Hayball. As well as providing a government primary school for 525 children, the project will include facilities for the growing community in Fishermans Bend, an area of great urban renewal in Victoria.

The award for best Residential Future Project went to Design and More International’s Uptown project in Dubai, UAE. The architects intention is to achieve continuity between the past, the present, and the future by finding timeless language and techniques as well as time-honoured local traditions across the 20,000m² eight storey scheme. Judges felt the designs “deviate from the generic new development in the city as a perfect example of how one should build respecting the architectural character, climate and materials of the location whilst still responding to social needs.”

The prize for the best future Commercial Mixed-use Future Project was given to Kampung Admiralty by Woha, which will be Singapore’s first integrated public development that brings together a mix of public facilities and services under one roof. Subverting the traditional approach for each government agency to carve out their own plot of land, resulting in several standalone buildings, the Kampung Admiralty is conceived as a one-stop integrated complex, which will meets the needs of Singapore’s ageing population and “offers great lessons for the future of mixed-use projects”, according to judges.

Aedas‘ designs for its Chengdu City Music Hall project in China scooped the award in the Future Projects: Competition Entries category. Located in Chengdu’s Wuhou district, the designs house the city’s finest world-class cultural venues, art exhibition halls, and educational facilities as a city cultural landmark. Inspired by an abstract analysis of Traditional Chinese Landscape Painting or Shan Shui style painting -“shan” meaning mountain, and “shui” meaning river, the project formalizes this language through its roof topography ‘mountains’ and erosion along the lower pedestrian levels  ‘river’. Judges recognised the designs as a “sophisticated essay in the fusion of natural and manmade environments.”

In the Future Projects: House category the winning entry was Arthur Residence by 5468796 Architects, a private home that is currently under construction in Regina, Canada. The judges were impressed by this “thoughtful response to the standard suburban rectangular lot”, a building which will encompass the entire width of its plot and include four internal courtyards,  creating a secret garden where its nature-loving owner can relax.

The Shelter for Victims of Domestic Violence in Israel by Amos Goldreich Architecture and Jacobs Yaniv Architects won the Future Projects: Health category. This new shelter has been commissioned by the Israeli charity No To Violence, led by distinguished human rights champion Ruth Rasnic.  It will be the charity’s first purpose-built shelter, as well as accommodating its administrative headquarters, and has been designed to house families from diverse ethnic and geographical backgrounds, including Arab, Israeli, Ethiopian, Russian and Ukrainian women and children.  The new shelter, which will occupy land gifted to the charity by the local municipality, will accommodate up to twelve families, all of whom require individual privacy, yet need to coexist with each other and with the staff who look after them. Judges praised the architects for their “socially driven, responsive design” which they felt demonstrated an “invitingly open and considered interface between interior and exterior spaces.”

The Future Project: Culture award went to Boogertman + Partners Architects for Wangari Muta Maathai House, a “beautiful, poetic and integrative” project in Nairobi, Kenya. Intended as a centre for commemoration and learning, the project is dedicated to the memory of the late Wangari Maathai, who became the first African woman to be awarded the Nobel Peace Prize for her work as an environmental activist and national leader.

WAF sees over 2,000 international architects descend upon its venue Arena Berlin this week. Running alongside WAF is its sister event INSIDE which will showcase 2016’s most ground-breaking interiors projects. Visitors to INSIDE will be able to view this year’s best in class interiors nominations from leading practices and designers across four continents. 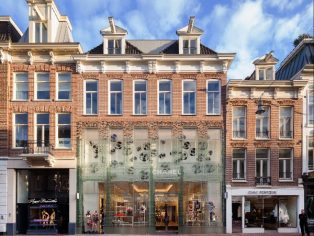