An exhibit to mark the centenary of the birth of Robin Day will form part of the London Design Festival at the V&A, with an installation by Turner Prize nominees Assemble.

One of the most significant British furniture designers of the 20th century, Day’s work pioneered a new modern ethos for post-war Britain with simple, functional furniture.

To celebrate his life and to mark the huge contribution he made to our everyday lives, an exhibit focusing on Day’s passionate interest in wood – an aspect of his work often overlooked – will be on display outside the V&A’s Britain 1500-1900 Galleries from 19th September.

Born on 25th May 1915, Day’s prolific body of work spanned 60 years including the 1963 Polypropylene chair for which he is most famous.  But wood, rather than synthetic materials, was at the heart of his work and life.  The exhibit, curated by Jane Withers and supported by the Robin and Lucienne Day Foundation, will explore this in more detail through a combination of Day’s extensive archives and an installation by design and architecture collective Assemble.

“Wood played a huge part in Day’s life, both as a designer and in his home life. But it is an aspect of his work that few people know much about.  Exploring this strand in his work through the archives and creating an installation in response to his work in wood will allow Day’s many admirers to see his work from a new perspective and also highlight how he turned wood into an expressive modern material.”

Part of a series of events to mark Day’s centenary during London Design Festival, the exhibit will form the focus of ‘Day in London’ – a cultural trail across the Capital joining the V&A with The Royal Festival Hall and the Design Museum.  Day designed all the seating for the Royal Festival Hall when it first opened at the Festival of Britain in 1951.   The Design Museum recently acquired the contents of his studios.  Both venues will mark the date with installations highlighting different aspects of Day’s work.

“I remember my father at our cottage in the oak woods of West Sussex, logging for the wood burning stove and making all sorts of things out of wood just for pleasure. He was completely at home with timber – he even seemed to think in wood.  So it feels absolutely right to me that we should celebrate the centenary of his birth by exploring these personal aspects of his creativity, as well as his famous industrial designs.”

Alongside the Day in London trail, other Robin Day centenary celebrations include a collaboration between contemporary furniture retailer twentytwentyone and a select group of ten contemporary designers to compose an editorial of Day’s Reclining Chair, one of his most enduring designs.

The contemporary chairs, by designers including Martino Gamper, Tom Dixon and Margaret Howell, will be launched and available to order from twentytwentyone from 1st July.

“As a designer, I greatly enjoy working in timber. Unlike synthetic materials, it has unpredictability, an infinite variety of texture and pattern, smells good when worked and is sympathetic to the touch – it has soul!” Robin Day, 2001 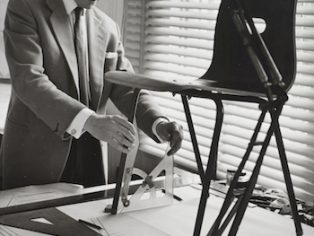