The prestigious Sunday Times British Homes Awards recognise a variety of housing schemes and architectural projects across the country, and celebrate creativity and exceptional practice in craftsmanship. The ‘Best House Design’ award focuses on homes that champion best practice in design and specification.

Designed by award-winning architect Alison Brooks, Bath Riverside is totally unique and gives residents direct access to the River Avon which runs alongside the development. The design, while modern, pays tribute to Bath’s classic Georgian past and has proved as popular among buyers as it has judges.

It is the second time in two years the developer has won the award, as last year it was given to their Oakgrove Village development in Milton Keynes.

Bath Riverside offers high quality residences from studios to four bedroom homes, and are among very few residential developments in the city to enjoy direct access to the riverside while being within walking distance of the town centre.

The development plays a prominent role in the regeneration of the Riverside area and takes pride of place on ‘the western corridor’, a former industrial site left derelict for more than 25 years. The site has undergone an extensive transformation since the beginning of 2011 and the Sunday Times British Homes Awards ‘Best Design’ win for Crest Nicholson is confirmation of the positive impact the scheme is having.

“We are delighted that Bath Riverside has been recognised at The Sunday Times British Homes awards. That we have now won this award two years running reflects the fact that Crest Nicholson schemes are designed to an exceptionally high standard — and this year’s win is a fantastic achievement for the Bath Riverside team.

“We’ve seen a phenomenal amount of interest in Bath Riverside, which is testament to the quality of these outstanding developments. 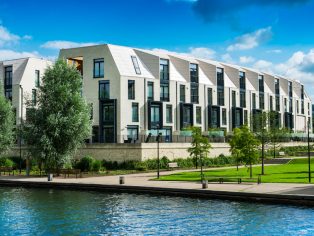