The new tower stands 60 metres tall, making it the second tallest in the UK after Heathrow, and has been designed to provide 360-degree panoramic views around Greater Manchester and into Cheshire.

The completion of the project marks the end of a collaborative five year period, commencing with the award for the project in late 2007, won in tender when competing with significant European interest. Chris White,

“The project has been a challenging, yet rewarding experience for one of the UK’s largest airports. The successful transition of the air traffic services from the old tower to the new tower was a momentous date for all involved.”

The construction of the 60 metre shaft was completed in just nine days and was led by contractor, Morgan Sindall who used the ‘Slipform’ process which involved concrete being continuously poured for 222 hours. Approximately 600 cubic metres of concrete and 65 tons of steel reinforcement were cast to form the nine metre wide shaft.

CPMG has become a leading authority in the design of air traffic control towers, completing more than any other architectural practice in the UK, with the new tower they designed for Birmingham Airport recently winning ‘Project of the Year’ in the West Midlands RICS Awards. CPMG has also designed baggage handling facilities, terminals, departure lounges and hangars.

“As a firm we have extensive knowledge and expertise in building a range of structures for aviation, with air traffic control towers being a particular speciality. Our expertise is being more widely called upon and we have contributed technical reports to the Civil Aviation Authority (CAA) on the subject of air traffic control visibility and declination angles. This knowledge is crucial when assessing tower heights and the suitability of sites, particularly from a point of view of safety. We also use 3D models to help us in this process.

“It’s great to see Manchester Airport fully operational and playing a crucial part in the safe air travel of passengers. We look forward to further opportunities both here in the UK and on the international stage.”

“We are delighted with the new control tower and pleased that it officially opens as we celebrate our 75th year of operation. It’s a fitting moment for us and demonstrates our continued investment in Manchester Airport, and this will be our most significant development in the airport this year.

“It also follows previous investments made such as the £10 million upgrade for the airfield in 2010 so we could prepare for the arrival of the Emirates A380 and the complete refurbishment of runway one in 2011. The new tower provides facilities suitable for a 21st century airfield and has further strengthened our great relationship with NATS, with whom we have worked together to create an iconic building, in a secure unit next to the airfield.” 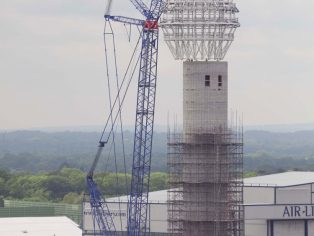