National architectural practice, Corstorphine + Wright has worked with client London and Continental Railways (LCR) to bring their vision for a reborn Leake Street Arches in London to life.

The site, which is formed of arches and vaults that run beneath the former Eurostar terminal at Waterloo Station, has been converted by LCR into a series of eight units designed for use by independent bar, restaurant and entertainment operators.

Adjacent to the famous Banksy Graffiti Tunnel, the arches open out onto Addington Street close to the South Bank and London Eye, and offer a total space of 25,000 sq ft with each of the spaces designed to include external seating areas.

Formerly occupied by a car park and car wash, the layout of the new development was defined predominantly by the rhythm and extent of the arches, with the constrained space along Addington Street presenting an opportunity for an inviting spill-out area and public realm.

A new pedestrian pathway was also developed to connect the tunnel through to Addington Street and Westminster Bridge Road, while providing access to four of the arches that will become bars and restaurants.

“Leake Street Arches represents a unique project, with considerable constraints on the internal environment within the vaults, combined with a high quality public realm and circulation space. LCR was keen that any works preserved the culture that had grown in the area, predominantly through the presence of existing occupiers, the Vaults, and House of Vans, focused on creativity and collaboration.  The environment would need to enhance the current space, attract start-ups and independent tenants whose ethos will resonate with the environment.”

Internally, the space featured a complex mix of supporting pillars and escapes from the former Eurostar terminal, which dominated and largely obscured the original Victorian features.

The concept was to project the original vault section through the underpass to echo the arches. These elements also gave the constrained scheme a degree of visibility from the oblique views from the south.

The public realm creates expression though textures such as gabion stones, beton-brut concrete, corten and timber, while ensuring that future occupiers of the units can make their own additions.

Ensuring the application of the correct lighting strategy was also a paramount consideration, with local firm Nulty Lighting providing a solution that was both inviting and secure, with layered lighting and washes over the different surfaces combined with under-lighting of the public realm.

“Through consultation with key users of the tunnel space, we found that inadequate lighting was a fundamental issue. Nulty designed a robust lighting rig that could both wash the space with light and be sequenced to create a gallery space that could be flexible and ever-changing, creating a resonance with the environment.”

The redevelopment is being led by owners LCR and complements the wider regeneration taking place in Lambeth. 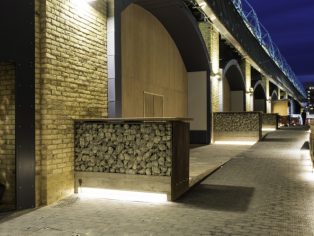