Contour from Luceco lights the way in Valencia

Contour from Luceco has been installed at the Valencia-Cabañal Railway Station located in the Cabañal-Cañamelar neighbourhood in the Spanish city ​​of Valencia.   Contour is the ideal linear fluorescent luminaire replacement where continuous runs of illumination are required in many commercial and service environments.

The LED lighting system consists of connectable modules offered in 600 mm, 1200 mm, 1500 mm and 1800 mm lengths that can be surface mounted, suspended or recessed.  Seamless lines of cost effective LED lighting can be created with interconnecting power and module connectors including corners, T junction and cross pieces. Other options include direct and indirect lighting distribution as well as DALI and emergency Self-Test variants.

The original station of Cabañal was opened in 1862 with a new station built alongside in 1991. Current railway facilities owners Adif are now benefitting from over 50,000 hours operational life offered by Contour as well as no maintenance over the lifetime of the luminaire, an important factor when considering applications such as railway stations where 24 hours a day operation may be required 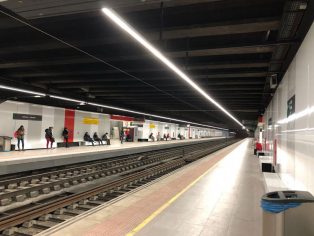