In 2016 LEGO fans of all ages can experience the LEGO® story and the endless possibilities of the LEGO brick in a 12,000 m² experience centre in Billund, Denmark. Today the foundation stones of the unique “LEGO House” were laid.

Three generations of the owner family of the LEGO Group today laid the six foundation stones of the LEGO House in Billund, Denmark, the hometown of the LEGO Group. The six stones – precisely dimensioned to represent six classic LEGO® bricks – symbolise the values which are at the heart of all LEGO experiences: Imagination, creativity, fun, learning, caring and quality.

“For my family and me, the LEGO Group has always been much more than just a company and our products more than just products. I am very passionate about play and how children learn through playing with LEGO bricks. This is essentially the LEGO idea and what the LEGO House is all about. I look forward to see the long time dream of having one place where anyone can experience the LEGO idea come true”.

The LEGO House will be a hands-on minds-on experience centre where LEGO fans of all ages can come and experiment with LEGO bricks, share stories with LEGO bricks, express their imagination and creativity through LEGO bricks, and not least be challenged as LEGO builders by meeting other builders from all over the world.

While the interior experiences of the LEGO House are still under development, the building is in itself a tribute to the LEGO brick, as the architectural shapes are based on the LEGO brick.

Bjarke Ingels, Founding Partner of BIG-Bjarke Ingels Group and the architect behind the LEGO House said:

“For me the LEGO brick embodies the notion of systematic creativity – that the rigour and rationality of the LEGO brick allows children of all ages infinite possibilities to create their own worlds and to inhabit them through play. We have been inspired by the modularity of the LEGO brick to create the LEGO House. It will appear like a cloud of interlocking LEGO bricks that form spaces for exploration and exhibition for its visitors within. On the outside the pile of bricks form the roof of a new covered square as well as a mountain of interconnected terraces and playgrounds.”

The building is expected to open for visitors in 2016, and today marked the official start of the construction phase. At the event, Jørgen Vig Knudstorp, CEO of the LEGO Group said:

“Today, we sow the seeds that will grow over the next many months to become the one and only place in the world where any child, fan, family, and adult can visit and experience the true LEGO story and be inspired by the endless possibilities of the LEGO brick.”

When construction of the LEGO House is completed in 2016, a gigantic LEGO brick will sit on top of the 23 meter tall building which will cover an area of 12,000 m² – including a 2,000 m² covered square.

The LEGO House will feature vast experience areas, a café, a unique LEGO store, the public square as well as the several open roof terraces. It is expected that approximately 250,000 people will visit the LEGO House annually.

The Mayor of Billund municipality, Ib Kristensen said at the event:

“We are proud that the LEGO Group has chosen Billund as the location for the LEGO House. It is a testament to the strong connection between the company, the owner family and the local community which has lasted decades, and it is a significant contribution to the future development of our community.”

The LEGO House is definitely going to mark the town of Billund, said Søren Lund, General Manager of the LEGO House:

“We hope that the LEGO House will be an attraction in itself and become a gathering point for both local citizens and the many people visiting Billund. Not only because of the fantastic architectural building but also because it will be free to climb the building through stairs and experience the imaginative terraces. I am very excited to follow the construction phase and look forward to welcoming the first guests and giving them the ultimate LEGO experience.” 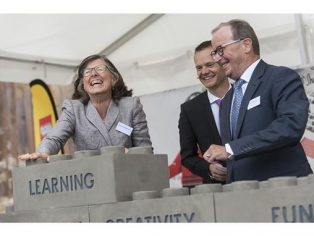 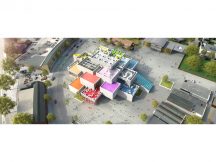