The ITM’s vision is to use pioneering science to accelerate the delivery of personalised healthcare. It aims to cure disease and save lives by applying transformative science and technology and by educating and training the healthcare workforce. ITM Birmingham is delivered by Birmingham Health Partners, which brings together the clinical, scientific and academic excellence of University Hospitals Birmingham NHS Foundation Trust (UHB), the University of Birmingham and Birmingham Children’s Hospital NHS Foundation Trust (BCH) as well as the Department for Business Innovation and Skills.

The ITM is at the heart of an internationally-recognised, clinical academic community, whose competitive advantages are unrivalled in the UK and include:

The new ITM facility is a part of a hospital trust masterplan (also developed by Glenn Howells Architects) and will contain office space, laboratories and collaborative working areas, as well as a clinical trials facility. The building will retain its existing stripped-back Art Deco façade with the internal spaces reconfigured as four wings set around a newly in-filled courtyard.

The project received planning permission in December and work commenced on site at the beginning of May and represents the first healthcare development for Glenn Howells Architects.

“We are very proud to be appointed to deliver this project which is important not only for the three clients but the city as it is a major step in building the life sciences cluster in south Birmingham.”

“We are delighted to have engaged the services of Glenn Howells Architects to deliver the Institute of Translational Medicine Birmingham. We have every confidence that they will provide us with a state-of-the-art facility whose design sensitively reflects its architectural heritage and transforms that heritage into an iconic centre for translational medicine in Birmingham.” 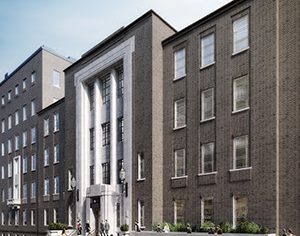