Completion of the Murray Hotel is celebrated in Hong Kong

The Murray Hotel, re-imagined and designed by Foster + Partners, officially marked its completion at a plaque unveiling ceremony in Hong Kong officiated by guest-of-honour, Mrs. Carrie Lam, Chief Executive of the HKSAR along with Mr. Peter Woo, Chairman of Wheelock Holdings Pte Ltd. The Murray, converted from the previously known Murray Building, is one of several historic landmarks under the Conserving Central Initiative Project to celebrate the 20th anniversary of the HKSAR.

A former government headquarters tower, the 27-storey Murray Building, originally designed by architect Ron Phillips almost 50 years ago, has been re-born as The Murray, a 336-room luxury hotel with panoramic views over the city’s Central Business District and serene green surroundings.

The architecture of the building is in direct response to the climate of Hong Kong with recessed windows, carefully orientated to avoid the harsh tropical sunlight. The new design retains the façade while upgrading other aspects of the building and extending the life of the building by introducing new functions appropriate for the changing demands of the city – giving it a sustainable legacy for years to come.

A central aim of the project was to reconnect with the city at ground level, creating a new street frontage on Garden Road, transparent and welcoming ground floor spaces, and enhancing and extending the landscaped grounds to incorporate a public tai chi area. A large historic tree (‘Old and Valuable Tree’), which rises up through the podium has been conserved as the centrepiece of the arrivals sequence for guests.

“Having actually worked in this building twice in my public service career, I am thrilled to witness the impressive transformation of The Murray, once home to many government departments for half a century, to becoming a home away from home for guests from around the world.”

“We are grateful that we are given the opportunity to take on this project, a very unique project; we are inspired by the energy of this building, and the timelessness of the architecture; we are humbled because we have the responsibility to undertake this very important project to create a dialogue between the old and the new,” said Mr. Peter Woo.

“We decided to mandate Foster+ Partners to work with us because of their vast experience in conservation projects the world over. We thank our project partners and various government departments for working closely and diligently together to make the completion of the project possible,” Peter Woo added.

Committed to preserving this iconic landmark, Wharf engaged Foster + Partners to redesign, redevelop and launch this hotel for the people of Hong Kong. By breathing new life into this modern Hong Kong property, a unique hotel and leisure destination for local and international guests to enjoy has been established.

As the flagship property of Niccolo Hotels, which owns and operates an exclusive collection of luxury hotels, The Murray received its hotel license in late November, and will fully open for guests in March 2018

About The Murray, Hong Kong, a Niccolo Hotel

The Murray, Hong Kong, opening in 1Q 2018, is a high-profile preservation project by British international studio for architecture and integrated design Foster + Partners. The hotel, part of Hong Kong’s Conserving Central Initiative, was previously the stand-alone Murray Building, one of the city’s most iconic landmarks. A member of Global Hotel Alliance’s Ultratravel Collection, the US$1 billion contemporary urban chic sanctuary will feature 336 oversized rooms and suites spanning 25 floors. Other facilities include a stunning rooftop bar with breath-taking views of the central business district and the green oasis of Hong Kong Park, a series of signature restaurants and bars, as well as creative meeting and event spaces. Further details on The Murray, Hong Kong are available at niccolohotels.com 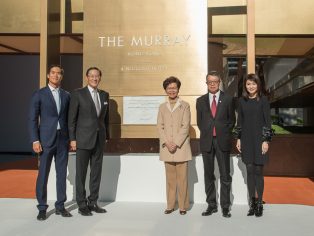