This landmark, innovative, mixed use development sits at a prominent junction adjacent to Olympic Way, the main pedestrian route connecting Wembley Station and Stadium. On site and nearing completion, the scheme is the second tallest modular building in London, designed around a central courtyard with a 20 storey residential tower rising from a 7 storey block of housing on the southern boundary. To the west, fronting Olympic Way, is a 12 storey block with retail and a 237 room hotel. A lower 4 storey wing returns along the northern boundary to complete the central courtyard.

Constructed in an L-shape, the buildings are divided into a hospitality and residential space, although there is additional space for commercial and leisure activities at the ground level. Affordable housing solutions company, Network Housing Group, owns the residential portion of the building. The hotel, facing Olympic Way, is owned by international hospitality chain Novotel.

In 1999 planning was granted to demolish the former clothing warehouse and replace it with a large hotel development. This was subsequently deemed unviable and the client approached HTA to design a new mixed use, residential led scheme. After a year of collaboration with Brent Council the development was presented to the GLA in May 2008 and again in October 2008, where it was positively received. The planning application was submitted in late 2008 with permission granted in June 2009.

Aside from its innovative volumetric construction credentials, the project is significant because as a key first piece of the masterplan to be delivered it sets the standard for the regeneration of Olympic Way. Furthermore, it provides an exemplar model for mixed use development; achieved through a carefully considered juxtaposition of uses, a blend of public vs. private space and access, and a successful balancing of the need for privacy, security and shelter against the need for open aspect, views, and increased footfall for retail/commercial offer. The new appearance of Olympic Way: a rear-ventilated ALUCOBOND® spectra Cupral façade now features an eye-catching metallic shimmer. 1 100 m² of ALUCOBOND® panels envelop the building.

The off-site manufacturer of the modular designs, Vision Modular Systems (VMS), constructed prefabricated modules that were delivered by crane at predetermined times to the site. Delivering and assembling roughly eight modules a day, each module was craned into position. However, the exterior cladding and roofing systems were installed on site.

Showcased as protruding window boxes, ALUCOBOND® PLUS spectra Cupral was chosen for the exterior design of the 237-room hotel. Spectra is an ALUCOBOND® finish series known for its natural luster and ability to change color based on focal viewpoint and natural light. The versatility and constantly changing nature of the cladding material allows for a playful exterior design. 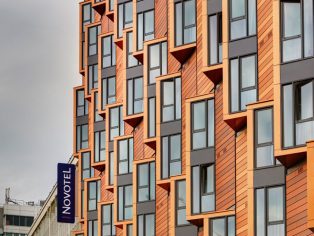