Congratulations to the winners of the 2014 WAN Façade Award; the seductive recycled copper façade of CO Architects’ Health Sciences Education Building, part of the Phoenix Biomedical Campus in Arizona, USA, has been awarded first place.

The ebullient Liverpool Department Store in Mexico City by Rojkind Arquitectos, the luscious One Central Park in Sydney by PTW Architects, and the meticulous South Australian Health and Medical Research Institute (SAHMRI) in Adelaide by Woods Bagot have each been highly commended.

The façade of the South Australian Health and Medical Research Institute, with its thorough performance-led design development, was an impressive entry. Sited in Adelade, Australia, the judges were appreciative of the difficulties posed by the harsh climate, while agreeing that ‘the façade makes the building significantly more interesting’ (Renato Benedetti). Bruce Nicol observed ‘they’ve done a lot of study work’, while Benedetti admired ‘the rigour and engineering depth of analysis’, recognising that given the stringent requirements of the programme, a visually appealing and intelligent design solution had been achieved. .

One Central Park by PTW Architects was praised for the scale and visually successful application of vegetation across the façade. Benedetti found it to be ‘extraordinarily well handled’, adding that he’d ‘never seen green walls used so comprehensively on such a big building’, even though ‘they are set pieces that are very, very hard to achieve’.

The Liverpool department store was praised for its vibrancy and clever engineering. Benedetti was particularly impressed, finding success in ‘its introduction of a level that wasn’t there in the existing building, bringing people into an entirely new space’, adding that ‘with the raw material of a very blank box, they’ve managed to add a layer of extroversion, full of Mexican joye de vivre’. The judges also felt the subtlety of the structural system employed to deal with the weight of the new addition added to the visual dynamism of the building, with Robert Kennett stating it gave the design a ‘magical’ quality.

The judges also admired the Health Sciences Education Building’s aesthetic response to its context; the long horizontal lines formed by the folded copper successfully ‘reflect the stratified earth rock formations in the surrounding Arizona desert canyons’ (Steve Mudie), with the golden orange of the metal evoking the red hues of the desert nearby. Furthermore, the judges found the design made use of the sweltering solar gain present year-round in Arizona, Kennett noting ‘the façade keeps the building cool with the ventilated cavity behind the copper’. Lastly, the façade showed an impressive concern for sustainability; CO Architects employed recycled post-consumer-use copper across the whole building.

At first, the judges were perplexed by how the CO Architects’ façade for the Health Sciences Education Building in Arizona had been fabricated, questioning how the rectangular panels fit together after a series of irregular and intricate folds. Impressed by the iterative design development involving a range of modelling mediums, Benedetti remarked the project had succeeded in ‘taking a historic material and turning it into something quite different’, stating, ‘to me, that’s innovative’. Nicol too was impressed, remarking ‘the story is very visual, and the way they’ve got there is very rational’. 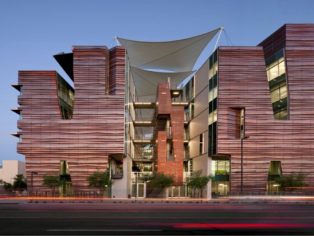 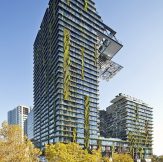