The Chartered Institution of Building Services Engineers (CIBSE) revealed the winners of its prestigious Building Performance Awards at a ceremony on Tuesday 11th February 2014 at the Grosvenor House Hotel, London.

Attendees saw Sustainable Design Solutions and Marks & Spencer awarded the overall accolade of ‘Carbon Champion of the Year’ for their commitment to improving building performance and reduction of energy consumption at the retailer’s Cheshire Oaks store, which also won in the category of New Build Project of the Year (value over £10m).

Manish Datta, head of sustainability strategy at Marks & Spencer, on receiving the Carbon Champion of the Year Award, said:

“Cheshire Oaks represents the very best of M&S and we are delighted to have been recognised by CIBSE for its performance.”

These two significant Awards for one of the leading retail businesses in the UK come hot on the heels of the retail sector as a whole recognising the critical nature of reducing carbon emissions through energy efficiency and systems design. Last week the British Retail Consortium announced ambitious targets to cut energy-related emissions from buildings by 50% by 2020, targets set under its ‘A Better Retailing Climate: Driving Resource Efficiency’ initiative.

CIBSE President, George Adams, commented that all of this year’s Building Performance Award winners and nominees should be celebrated for their outstanding accomplishments, and for showing how our industry can reach out to achieve beyond best practice.

Sustainable Design Solutions and Marks & Spencer receive the Carbon Champion of the Year Award at the 2014 Building Performance Awards.

New for the 2014 Building Performance Awards, CIBSE introduced the International Project of the Year category with new build and refurbishment projects shortlisted in Australia, China, Hong Kong, Italy and Singapore. For this Award the winner was Atelier Ten for its stunning and innovative designs for Gardens by the Bay in Singapore, which the Judges described as an ambitious project given a well thought through, holistic engineering solution.

The CIBSE Judges also recognised a “one of a kind project” by awarding a Judges’ Special Engineering Award to ChapmanBDSP for the Velodrome London 2012 Olympics, which showcased the world-leading attributes of British engineering and British cycling.

The winning entries for the CIBSE 2014 Building Performance Awards were:

Client of the Year

Refurbishment Project of the Year (value over £5m)

Refurbishment Project of the Year (value up to £5m)

This Award is made to the individual, team or organisation chosen from the winners in each category that has made the most outstanding contribution to achieving improved building performance. 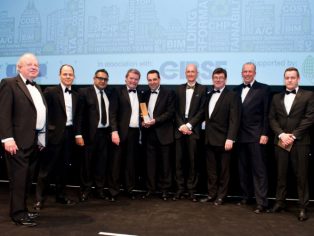