The Chapman Taylor scheme for Land Securities opened its doors in March 2013 bringing a contemporary shopping destination to the heart of Leeds city centre. It was awarded the highest accolade for design at ICSC’s Annual VIVA (Vision, Innovation, Value, Achievement) “Best-of-the-Best” convention, which recognises the most outstanding examples of shopping centre marketing, design and development, sustainability, and community service worldwide.

Trinity Leeds, named after the adjacent 18th _ century Holy Trinity Church has already won the architectural practice many design awards for being a revolutionary new type of retail destination and still continues to set the benchmark for market-leading and modern shopping centres, both in the UK and internationally.

Chapman Taylor UK completely modernised and integrated three of Leeds’ busiest shopping streets into an all year round late night venue for fashion, food and film. Trinity is a naturally ventilated scheme composed of buildings linked by a series of open air arcaded streets and public spaces along with an iconic domed roof with a series of self-supporting glazed grid-shells rising 100ft above street level.

In addition to creating a modern shopping experience, almost 25% of space has been dedicated to food and leisure, including the creation of a rooftop dining terrace, cocktail bar, pub / restaurants and a 27,000 sq. ft., four screen art-house cinema. Most revolutionary of all has been the creation of ‘Trinity Kitchen’, the UK’s first authentic indoor street food venue, where food vans are lifted up to the first floor by a hydraulic lift. An extensive public arts programme is also integrated, with the architectural design accommodating several sculptures by renowned artists.

“We are thrilled that Trinity Leeds has won this global recognition. We carefully designed and delivered a well thought out retail and leisure destination that fits well within its urban context and it is a great achievement for it to be considered the world’s best designed retail location.” 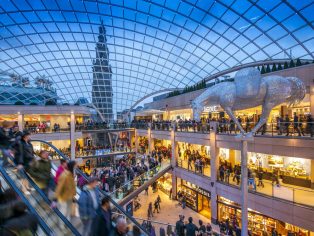