Centre Square is the collective title for the ‘heart of Middlesbrough’ development, a stunning and transformative project of civic space combining old and new with a mix of buildings designed to bring a renewed vibrancy to the city.

Both One & Two Centre Square were the creation of Seymour Architects; One Centre Square being a four-storey office building with a net internal area (NIA) of 60,000 sq ft and Two Centre Square a three-storey office building with an NIA of 30,000 sq ft. For both constructions the brief was to design modern, impactful structures. One Centre Square, for example, has an external white brick frame, which extends from ground to the third-floor level. A number of elements are arranged asymmetrically within each structural bay to provide visual interest; the elements include curtain wall, angled brickwork and iridescent cladding. A fully glazed penthouse storey sits above and is set back from the brickwork frame. Two Centre Square adopts the same strong white brick frame, with curtain wall infill, forming the base or plinth that the two upper floors rest upon. Curtain walling extends from first floor to the roof parapet and the building is provided with its character by fins that extend from the curtain wall mullions. The spacing and frequency of the fins increases with height and are formed in a cladding material that embodies two iridescent colour pigments, so that as the material is viewed from different angles, it changes colour. Both the plinth and the finned curtain walling form an uninterrupted wrap enveloping the whole building.

With vitality, vibrancy and regeneration the key motivators behind the projects, the buildings required a façade and finish to match, which is why ALUCOBOND® A2 was chosen for the cladding on both buildings finished in the company’s ‘Dessert Gold’ for One Centre Square and ‘Amazon’ for Two Centre Square. Both finishes work in unison with the façade to stunning effect.

Fabricated by CA Group  and installed by Topside Group, approximately 3,000 m2 of ALUCOBOND® A2 was used chosen for its non-combustible properties, whilst facilitating the most envelope expanding architectural demands its mineral-filled core meeting the strict requirements of the fire regulations globally and finding Application on a wide range of project types.

Both buildings are Grade A BREEAM, which means they meet the very highest standards for energy efficiency and sustainability.

And both buildings have received critical acclaim from both the local community and business sector. 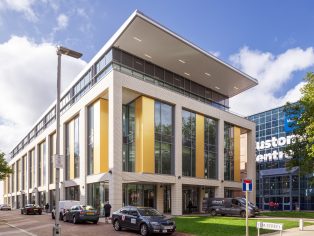