Dedicated to honouring the best global construction projects and the companies that designed and built them throughout the entire world, the awards focus on safety, innovations, challenges, design and construction quality – putting special emphasis on global diversity of project teams and international collaboration. The award presentation ceremony was held in New York on 6th June as part of the ENR Global Construction Summit.

CCTV HQ is a 234m tall building with a highly unusual shape, described as a ‘three-dimensional cranked loop’. The building is formed by two massive leaning towers, bent 90° at the top and bottom to form a continuous tube. Its looping first-of-a-kind structure resulted from a close collaboration between OMA in Rotterdam, Arup’s London, Hong Kong and Beijing offices, as well as other consultants in Europe, Asia and America.

The judges were impressed with the team’s effort to overcome the difficulties of gaining approval for a design outside the prescriptive Chinese building code, and also the challenge of connecting the two towers in the overhang suspended 36 storeys in the air. The linkage was accomplished at dawn on a windless day, when the two towers were at the same temperature and the movements at a minimum. 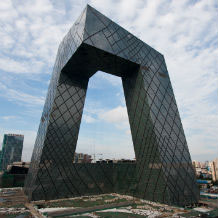