Edenhall cast stone has been used to detail the public walkway of a major residential riverside development situated next to the Tower of London in one of the city’s most historical locations.

Surrounded by a wealth of heritage sites, the Cheval Three Quays development of 159 serviced and residential luxury apartments provides unrivalled views across the Thames towards Tower Bridge, The Shard and City Hall. The name dates back to the seventeenth century when there were three individual quays on the site – Gallery, Chester and Brewers Quays.

Edenhall supplied an array of bespoke wetcast stone for the enhanced riverside public walkway, including an elliptical planter weighing 6 tons and cast as a single piece, steps and copings for the walkway and coping stones for the river wall. The stone was precisely cast following a detailed site survey to identify multiple dimensional variations.

“The planners wanted a Yorkstone-type paving and the finish and tone were selected to reflect the building and tie-in with the wider public plaza between Three Quays and the Tower of London, taking design cues from the surrounding area. There were constraints in the walkway delivery as we had to deal with level changes, ramps and contrasts for the visually impaired, giving access to all.

“I previously came across Edenhall through our sister company Sheppard Robson in connection with the Barking Riverside development and we worked closely to ensure precise colour matching and detailing.”

Edenhall is a leading manufacturer of architectural cast stone, producing from five sites across the country to the exacting performance standards of the UK Cast Stone Association. Edenhall’s MD Andy Cotton said:

“Whether your style requirements are contemporary or period, we offer a real alternative to quarried stone such as Portland, York and Bath stone with standard and bespoke cast stone details in a remarkably wide choice of colours and finishes.” 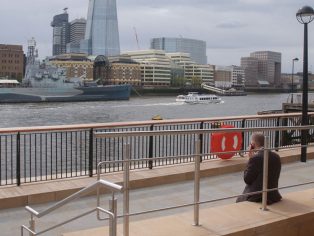 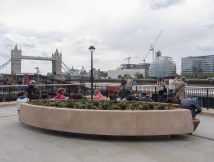