A development of 306 new homes just outside Cambridge has won the award for Best Housing 25 units or more at this year’s Annual Brick Awards which took place on 12th November.

Designed by Proctor and Matthews Architects and built by Countryside Properties, Abode at Great Kneighton, Cambridge, is an interesting and inventive scheme of intriguing house types and urban spaces which cleverly respond to a complex site, including a large existing roundabout.

At the entrance to the site, where the roundabout is located, the “Great Court” was created with a series of tall and stylish buildings within a landscaped courtyard, absorbing the hard infrastructure and making references to nearby Cambridge colleges. Two tall marker buildings stand alongside a series of terraces to provide a suitable gateway to the rest of the scheme. Brick has been used as the dominant material to match the robust architecture. In places it forms tall arcades around the courtyard perimeter, while elsewhere projecting brickwork gives depth and character to what would otherwise be flat facades.

Next lays a series of mews terraces supported by three storey saw-tooth houses. The use of brick echoes the Great Court and offers a strong contrast to the black weatherboarding. Projecting brick is used again to emphasise elevations, and highlight entrances and important townscape junctions.

At the rear of the site the “Green Lanes” zone has a village atmosphere where smaller houses are loosely clustered within private walled gardens and generous shared spaces. Black weatherboarding and red clay tiles – referencing nearby agricultural buildings – become the dominant materials and emphasise a further transition in volume and materials. Beautifully crafted brickwork remains present, however, providing continuity with the rest of the development.

Ibstock’s Ivanhoe Cream and Himley Ebony Blacks which were used have been fundamental to the design, character and success of Abode at Great Kneighton and used extensively to articulate scales and elevations, alongside other materials to denote shifts in density and typology.

The judges really liked the scheme and commented: “An exemplary development, utilising the landscape well, with a well thought out layout which fits superbly into its surroundings”

You can see pictures and find full details of the project teams on the BDA’s website www.brick.org.uk/brick-awards. 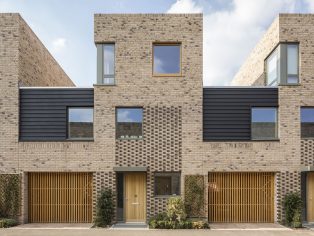