Calling all filmmakers and community activists: How do we prevent flooding?

The Landscape Institute and the Inter-Institutional Flooding Group have issued an open call for innovative and inspiring five minute films to demonstrate ideas on how to prevent flooding.

There has never been a more important time to address the challenges of water shortage, flooding and pollution. Year after year a growing number of the UK’s communities suffer the devastating effects of flooding and, in February 2014, the Thames Barrier was closed on a record 20 occasions, due to high fluvial floods in the capital.

So far, solutions have focused on clean-up efforts rather than preventative measures which is why the Landscape Institute and the Inter-Institutional Flooding Group have issued an open call to landscape architecture students and practitioners and members of the public to examine whether the money we spend on putting homes and lives back together when disaster strikes, could be used more effectively on preventing the problem.

‘How to Prevent Flooding’ is a film competition that asks entrants to look at the ways in which the UK manages, stores and distributes its water, and examine how we plan both the natural and the built environment to make our towns, cities and rural areas more resilient to flooding. Presented in the form of five-minute films, design ideas should innovate, inspire and challenge the public to take action.

Films can focus on issues from soft-engineered flood alleviation schemes to hold back water in the upper reaches of rivers, to flood defences in the lower reaches and around our coastlines – and more.

Whilst all are encouraged to consider the practicalities of realising their schemes, entrants should not necessarily be constrained by restrictions including current planning law and land ownership issues.

Five professional bodies, all members of the Inter Institutional Flooding Group, have teamed up in this call for fresh thinking on ways of making flood affected areas more resilient.

The winning filmmaker will receive £2,000 with a second prize of £1,000 and two runners up receiving £500 each. The top eight submissions picked by the judging panel, will be shown at the Landscape Institute’s Building Centre exhibition that runs in January 2015 at NLA (New London Architecture). 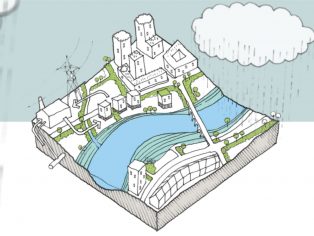