VAT rules are undermining sustainable development by rewarding developers who demolish buildings and penalising those who refurbish.

Baker-Brown, Senior Lecturer at the university’s School of Art Design & Media, wants a VAT ‘level playing field’ to encourage the kind of recycling and reuse of materials that were central to his Waste House, an award-winning building made of recycled materials including 20,000 toothbrushes, 2 tonnes of denim jeans, 4,000 DVD cases, 2,000 floppy discs, 2000 used carpet tiles to clad the facades, construction waste and surplus wood and bricks.

The House, built in the grounds of the university’s campus in Brighton, is the first permanent public building of its kind in Europe. It was built in part to prove Baker-Brown’s claim

“that there is no such thing and waste, just stuff in the wrong place” and to highlight that “the construction industry discards 20 per cent of everything it uses, the equivalent of scrapping one in five houses built”.

In an article published in The Conversation, the online news site written by academics and researchers, Baker-Brown says the construction industry suffers from a two-tier system of VAT.

“If you construct a new house or collection of new houses from scratch VAT is in effect not charged at all, it is zero rated. This is true for one-off ‘Grand Designs’-inspired self-builders or massive national house builders.

“However, if you are renovating or extending an existing house or housing estate VAT is imposed at a full 20 per cent. Up until 2010 VAT was reduced down to five per cent if renovation and extension works were undertaken on listed buildings. However, even this was unfair as it tended to favour better off people living in well healed buildings of significant historic merit – that’s why they were listed in the first place.”

The rules, he said, encourage black-market payments on renovation projects where contractors receive cash and pay little if any tax. The rules discourage ‘green’ refurbishing.

“A green retrofit will probably reduce the carbon footprint of a formerly gas-guzzling home by 60-80 per cent. But most clients, However well off , will baulk at handing over say £350,000 in VAT on a £1.75million project when, amazingly, the alternative is to completely demolish the existing property for as little as £7,500, and then build a completely new property with VAT zero rated, therefore saving over £300,000.

“The net effect of this current iniquitous situation is that I am accidentally in the business of demolishing perfectly good houses and sending them off to landfill, and all in the name of sustainable design. And many people with modest budgets are simply put off spending money on reducing energy consumption because of the VAT cost.”

“VAT rules should encourage green retrofit projects, not undermine them.” 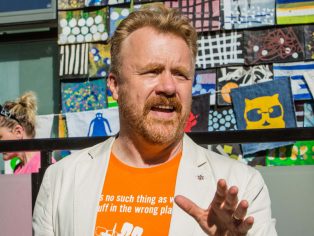