C.F. Møller Architects has been chosen to transform a former industrial site in London into a new mixed-use neighbourhood.

The architects were awarded a preferred bidder status by the Greater London Authority (GLA) and will work alongside a consortium led by property developer Catalyst Housing Group and housing association Swan to regenerate the Webbs Industrial Estate in Walthamstow.

The scheme will revive the former glass lampshade and bulb factory, which was purchased by the GLA in 2016, and provide 330 affordable shared ownership homes for first time buyers, over 3,000 m² of affordable workspace and artist studios, a park area to serve both existing and new residents, and retail space in the heart of the Blackhorse Road area.

The Mayor of London, Sadiq Khan, said: “I’m working hard to identify more brownfield sites across London that we can use to build the thousands of genuinely affordable homes London so desperately needs. This site in Walthamstow shows the benefit of City Hall taking a greater role unlocking and bringing forward land for development – working closely with housing associations like Catalyst to deliver a scheme that is 100 per cent affordable for Londoners struggling to buy a home.”

Rolf Nielsen Associate Partner, C.F. Møller, Architect MAA ARB RIBA said: “We are delighted to be involved in this important project that seeks to provide exceptional quality of design for this ground-breaking development of exclusively affordable homes. Our approach to this project is to develop an architectural and placemaking response with the focus on designing the best possible new homes, along with a creative hub of artists’ studios, small parks and retail spaces. This is complimented by Catalyst’s and Swan’s ambitious ideas for regenerating the Webbs Industrial Estate site”.

The proposals lodged by C.F. Møller, Catalyst and Swan beat off competition from 12 other bidders – a record number according the GLA.

Work to clear the site is starting later this year. 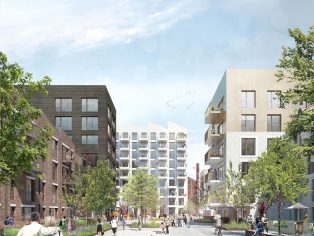 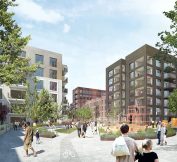 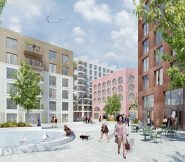