The presentation of the RIBA Stirling Prize trophy to architects AHMM took place at a special ceremony on Thursday 15 October at the Royal Institute of British Architects in London.

AHMM’s transformation of Burntwood School reimagines a 1950’s modernist secondary school campus for 2000 girls and 200 staff. The architects created six new faculty buildings and two large cultural buildings linking original buildings by renowned 1950s/1960s architect Sir Leslie Martin. Every building is full of light and air with double height spaces at the end of each corridor to increase natural daylight and create well-framed views. It offers a range of teaching spaces from conventional classrooms to interactive open spaces. Already a very sculptural building, AHMM worked closely with an artist to use large, colourful murals throughout the buildings – cleverly combining signposting with modern art.

Comments from the judges:

“Burntwood School is the clear winner of the 2015 RIBA Stirling Prize. It is the most accomplished of the six shortlisted buildings because it demonstrates the full range of the skills that architects can offer to society.

It encompasses great contemporary design and clever reuse of existing buildings as well as superb integration of artwork, landscaping and engineering. It is a genuine collaborative project. There was a wonderful working relationship between the head teacher and the architect: a true partnership of equals.

Burntwood is technically sophisticated in its use of prefabrication, its low-energy strategy and the minimal disruption to teachers and pupils during construction. It even has its own high street with a covered walkway formed from off-the-peg bus-shelters. Furthermore, the sculptural quality of the finely modelled concrete facades and the lush campus setting enhance the sense of the place.

Burntwood sets a standard in school design that every child in Britain deserves. It is a culmination of many years of creative toil by Allford Hall Monaghan Morris in designing schools up and down the country. This is their masterpiece.”

This is the first time AHMM has won the RIBA Stirling Prize. They have been shortlisted three times for previous projects: Westminster Academy (2008), Kentish Town Health Centre (2009) and for the Angel Building, London (2011).

“Burntwood School shows us how superb school design can be at the heart of raising our children’s educational enjoyment and achievement. Allford Hall Monaghan Morris, experienced school architects, have created a stunning campus. They have produced delightful, resourceful and energy efficient buildings that will benefit the whole community in the long term. With the UK facing a huge shortage of school places, it is vital we learn lessons from Burntwood. I am delighted to present architects Allford Hall Monaghan Morris with the 2015 RIBA Stirling Prize.”

“Schools can and should be more than just practical, functional buildings – they need to elevate the aspirations of children, teachers and the wider community. Good school design makes a difference to the way students value themselves and their education, and we hope that Burntwood winning the RIBA Stirling Prize shows that this is worth investing in.”

“The whole Burntwood School Community is delighted and proud that the scheme has been recognised as being worthy of the Stirling Prize. The Burntwood scheme is a testament to the power of strong, collaborative partnerships. These effective partnerships between the school, AHMM, Wandsworth Council and the contractor, Lend Lease, were sustained throughout the whole process from procurement to completion. AHMM were particularly generous with their time and commitment to fully involving myself and other school representatives. Staff and students have said on many occasions that the new buildings have greatly improved the quality of their day to day experiences at the school and students comment that their commitment to learning has been enhanced.”

Burntwood School was chosen by the judges today from the following outstanding shortlisted entries:

The winners of two other annual RIBA awards were also announced this evening: 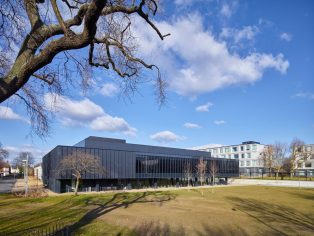