Almost a century ago, it was psychologists and philosophers who were the first to examine the impact of the environment on the human psyche. Later the human aspect also influenced designers in their work.

Architects like Frank Lloyd Wright, Richard Neutra, Walter Gropius or, later, Kevin Lynch increasingly developed their ideas based on the human perspective, on a perception of space and form – as “an anchorage for the soul” as Neutra put it. Because, if architecture influences perception, perception the psyche and the psyche well-being, then architecture directly impacts on wellbeing.

Consequently, architecture affects our health, as environmental psychologists of that period observed. However, buildings for the sick and those in need of care often look very different. Many of the hospitals and care homes built in the 60s and 70s are large functional machines. They are neither human nor empathic. Now that they are in need of renovation, the “monster” clinics are to be transformed into places with soul.

That is no easy task due to financial pressures and the clinics’ wide range of requirements. But it is possible, as the ALUCOBOND projects in the current issue of the digital magazine Forms&Elements prove. 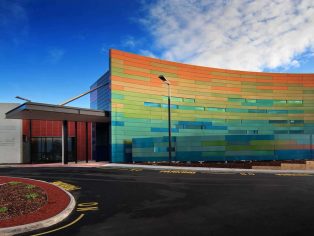