Sussex-based British fan manufacturer Vent-Axia, a leader in low-carbon ventilation, is delighted to announce that it has beaten stiff competition to receive a Ruban d’Honneur in the 2013/2014 European Business Awards. Selected to represent the UK in Europe as a finalist in ‘The Infosys Business of the Year Award with a turnover of €26-150m’ category, Vent-Axia will now go on to compete with nine companies from across Europe in the third and final round of judging, with winners to be announced in May.

The European Business Awards features ten categories in total with 100 Ruban d’Honneur recipients selected from throughout Europe, Following recognition as a National Champion Vent-Axia has been chosen to represent the UK by an esteemed panel of judges made up of European business and political leaders, academics and entrepreneurs.

“As one of these 100 Ruban d’Honneur recipients, Vent-Axia is a shining example of European business success. We wish them well in this last, but crucial, selection stage and look forward to announcing the overall category winners at our Gala Event in Athens, Greece, on 27th May 2014”.

“As a British manufacturer at Vent-Axia we’re absolutely delighted to receive the Ruban d’Honneur and to represent the UK in the final of ‘The Infosys Business of the Year Award with a turnover of €26-150m’ category of the European Business Awards. We are extremely proud to pave the way through our innovation and design. We’ve been operating for over 75 years in the ventilation sector and it’s an honour to be recognised as one of the leading organisations in Europe and in our field. The European Business Awards is widely recognised as the showcase for Europe’s most dynamic companies and we are now looking forward to describing to the judges in more detail how we are achieving business success.”

The European Business Awards has identified some of Europe’s brightest businesses based on their ability to demonstrate the three core principles at the heart of the Awards programme. The esteemed panel of judges were looking for organisations to represent the UK who exhibited the highest levels of innovation, business excellence and sustainability.

Core to Vent-Axia’s award entry was the company bucking the current economic trend by doubling its manufacturing capacity of unitary domestic fans at its UK Crawley site. The company has invested in British Manufacturing, the local economy and community with the launch of two new production assembly lines creating new site jobs. The new facilities also allow Vent-Axia to be flexible and responsive, easily making on-going design enhancements to products to meet customers’ needs, enabling the firm to continue its commitment to high quality, innovation and excellence.

“Our judges were extremely impressed by the very high standard this year. Vent-Axia deserves the very best of luck in the highly competitive final round.” 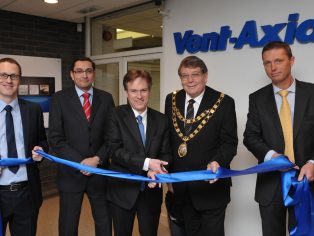