Britcon Engineering Services (BES) has completed a major contract to install supporting steelwork for the refurbishment of the listed 19th Century ‘Germany Gymnasium’ in King’s Cross.

D&D London is currently transforming the historic 10,000 sq. ft building into a complex of all day dining destinations with restaurants, bars and private rooms with outdoor terraces. The project is part of the wider King’s Cross development plan led by developer Argent with Carillion, BAM and Kier as the three main contractors.

Originally designed by Edward Gruning, the Grade II listed building was first built in 1865 for the German Gymnastics Society. It was the first purpose-built gymnasium of its type in England and was used as a venue for the first National Olympic Games one year after construction in 1866. The building ceased to be used as a gymnasium pre-war and has been used as offices, storage and an arts and exhibition space since, however its prominent location at the southern gateway to the 67 acre King’s Cross development has placed it in the heart of the now up-and-coming destination.

Whilst retaining the original façade, the internal space designed by Conran and Partners has been totally reconfigured over three new levels and BES has designed and installed a bespoke structural frame to support this.

“This structure was designed as a series of moment frames with depth restrictions and the completed frame had to fit around the original cast iron and timber structure inside the listed building. The Clerestory roof was particularly difficult to erect as it was positioned in the existing high level vault area with new MacAlloy ties running across the span of the building. This lead to some challenging site work using bespoke lifting equipment and spider cranes operating in a very tight environment.”

This is the second project carried out on the site by BES for main contractor Bam. It installed structural steelwork for building E2 which was completed in 2014.

BES is the structural steelwork contractor division of Yorkshire and Lincolnshire based Britcon. It provides design, supply, fabrication and installation of structural and bespoke steelwork for clients across all project sectors in the UK. 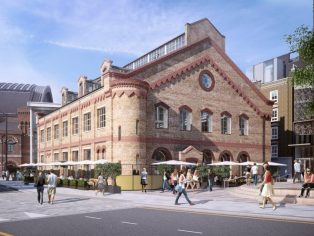