Birmingham City Council has granted detailed planning consent for the development of the first commercial building at Arena Central.

Fronting Broad Street and sitting opposite Centenary Square, 1 Arena Central – which is set to be the first speculatively developed new office building in Birmingham City Centre since the start of the latest property cycle – will provide 140,000 sq ft of accommodation across eight floors including 135,000 sq ft of Grade A office space, with typical floorplates of 21,000 sq ft. The building will also offer 5,000 sq ft of retail units on the ground floor and 68 car parking spaces in a secure basement environment.

1 Arena Central is the first step in the masterplan for the 9.2 acre mixed-use site, which is being delivered by Arena Central Developments Ltd (ACDL). Outline planning permission is already in place for 2.3 million sq ft of mixed-use space, including 860,000 sq ft of Grade A office accommodation, over 200,000 sq ft of residential units, 2,500 car parking spaces and more than 1.2 million sq ft of retail and leisure units.

“With reserved matters planning consent now secured, we are poised to begin the first phase of development at Arena Central in earnest and 1 Arena Central could be available to occupiers in mid 2016, ahead of the competition. Our location provides an outstanding advantage to occupiers in terms of the availability of amenities and access to transport links, with a stop on the new Midland Metro tram due to be delivered adjacent to the building’s main entrance.

“The development of 1 Arena Central is the first step towards the realisation of our vision for a truly mixed-use, office-led destination in the heart of the city centre. In Arena Central, we are looking to provide a high quality location that will continue to build on Birmingham’s burgeoning reputation as an attractive destination for blue chip occupiers.”

Designed by Make, 1 Arena Central features a curved façade with a contemporary chequerboard motif, designed to encourage pedestrian traffic onto the site and forming an extension to Broad Street. The building also features 2,500 sq ft of open balconies on the top floor, providing views across Centenary Square and back towards the Mailbox and Cube.

“We are really pleased to have received planning consent and are now able to move forward with this exciting development. The bold building design paired with the generous park landscape will create a striking new place in the heart of the city.”

“The recent absorption of 100,000 sq ft of stock at Two Snowhill is only exacerbating the current dearth of high quality stock in the city. The city needs deliverable opportunities such as this in order to meet the rising demand for high quality office stock from blue chip corporate occupiers such as Deutsche Bank.”

A joint venture between Miller Developments and Bridgehouse Capital, Arena Central is framed by Broad Street, Holliday Street, Bridge Street and Suffolk Street Queensway and lies at the heart of Birmingham’s City Centre Enterprise Zone, benefitting from simplified planning and reduced business rates as well as forming a significant part of the city’s vision for regeneration, as laid out in the Big City Plan.

“Birmingham is attracting considerable interest from a range of high quality international occupiers, keen to relocate or expand their businesses. Office-led developments, such as Arena Central will go a long way to securing further investments of this kind and continue to raise the standard of office accommodation in the city, as well as creating job opportunities.”

Alongside 1 Arena Central, the planning committee also approved the development’s infrastructure works and a modification to the site’s much anticipated public realm, which will form the first element of Arena Central’s phased delivery programme.

Running from the north to the south side of the site, the public realm has been designed as an urban meadow in a style that mirrors other statement public spaces, such as the High Line in New York, and includes some 40 per cent soft landscaping.

Arena Central is currently home to a number of redundant buildings including the former Carlton Television studios, and a leisure club, with a multi storey car park having already been demolished.

Clearance work on the site is already underway with further demolition of the remaining buildings due to commence shortly and work on 1 Arena Central and the new public realm set to start in early 2015.

Joint commercial agents on the scheme are GVA and CBRE. 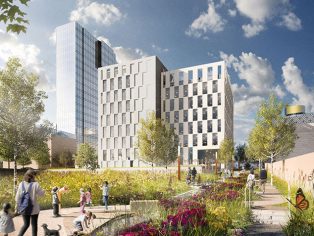