Beyer Blinder Belle  (BBB) announces that  Planet Word, a revolutionary museum dedicated to the power, beauty, and fun of language, opened to the public on October 22nd. The Museum is housed in D.C.’s historic and long-vacant Franklin School, which was revitalised by Beyer Blinder Belle.

Planet Word is the world’s first voice-activated museum, featuring three floors of interactive galleries and exhibits to engage visitors of all ages in experiencing words and language from a wide range of perspectives—from the science of how language skills develop early in life to how words are used creatively and persuasively in music, poetry, humour, advertising, oratory, and literature. General admission is free.

BBB oversaw the preservation and rehabilitation of the 53,244-square-foot Renaissance Revival building designed by Adolf Cluss, which is recognised as a National Historic Landmark. Standing at 925 13th Street NW, the building opened in 1869 as the cornerstone of a comprehensive system of segregated education for the city of Washington. The school was chosen to house Planet Word in large part for its rich history in public education and historic connection to the museum’s mission. It was here that Alexander Graham Bell made the first wireless transmission of the human voice — words — using a Photophone, a precursor to fibre-optic technology, in 1880.

“It has been an incredible opportunity for our team to realise the experience of Ann Friedman’s vision for Planet Word in the National Historic Landmark Franklin School,” says Gretchen Pfaehler, AIA, Partner and Senior Preservation Architect. “Planet Word is as revolutionary to experiential museums as the Franklin School was to educational buildings when it was built. The project celebrates historic spaces like the Great Hall while bringing new uses to spaces like the Mansard Room, an event space configured from the existing attic.”

Beyer Blinder Belle was chosen to oversee the preservation and rehabilitation of the Franklin School due to the firm’s specialisation in historic buildings, its specific knowledge of the building methods of Adolf Cluss, and the strict preservation standards and sensitivity applied to renovate the Franklin School’s interiors and striking architectural details. BBB’s role included replicating the building’s original frescoes, restoring some of its original classrooms, and restoring and renovating two grand staircases with their ornate cast-iron and wood railings. A fourth floor was created under the original soaring mansard roof to house a new event space, the Mansard Room, and connects to a new roof terrace on the historic roof overlooking K Street and Franklin Square. Besides housing an exhibit on the diversity of the world’s 6000 languages, the building’s central Great Hall has been rehabilitated to serve as a grand space for concerts, gatherings, and performances. Planet Word also has nine other immersive galleries; two classrooms; an auditorium; a lobby welcome area; a restaurant; a gift shop, administrative spaces; an open patio; and a new accessible entrance. 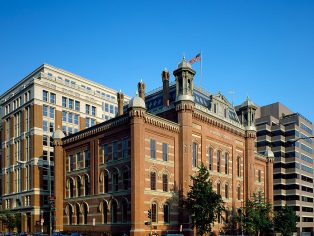