The Berggruen Institute today unveiled plans for a new campus in Los Angeles designed by Herzog & de Meuron, the Pritzker Prize-winning architecture firm internationally admired for the environmental sensitivity and intellectual integrity of its work; and supported by Gensler as executive architect. The campus master plan and its design respond to both the Berggruen Institute’s desire to respect and restore the landscape of its 447-acre site—over 90% of which will be preserved as open space—and the Institute’s intention to create a private educational forum where distinguished scholars can interact with thought leaders.

Founded in 2010 by philanthropist and investor Nicolas Berggruen, the mission of the Berggruen Institute is to provide critical analysis and new ideas that will shape political, economic and social institutions. Since its inception, the Berggruen Institute has launched the 21st Century Council, the Council for the Future of Europe, the Think Long Committee for California and the signature Berggruen Prize for Philosophy & Culture. In May 2016, the Berggruen Institute announced the decision to build its new campus in Los Angeles, at a site in the eastern portion of the Santa Monica Mountains near Topanga Canyon State Park, in recognition of the forward-looking spirit and profound connection to the natural world that are ingrained in Southern California.

“The mission of the Institute is to develop and encourage new ideas for a changing world and to propose practical solutions that can transform society—and humanity—for the better. By building our campus here on the Pacific coast, we hope to advance the position of Los Angeles as a world center for ideas, linking the East to the West. By commissioning this visionary design from Herzog & de Meuron, we demonstrate our intention to make an important contribution to the architecture of Los Angeles and the world.”

A landscape vision as much as an architectural project, the design of Herzog & de Meuron in collaboration with Michel Desvigne Paysagiste and Inessa Hansch Architecte, calls for the Berggruen Institute to concentrate development within previously graded areas, and thereby limits topographic changes. The principal site for the campus will be a long mountain ridge that was scraped and flattened in the 1980s to cap a landfill. The design envisions the ridge being restored and transformed into a linear park or gardened plinth, landscaped with drought-resistant plants and incorporating the collection, filtration and re-use of water.

Plans call for a low-density campus featuring meeting and study spaces, scholars’ residences and gardens along the linear park. The campus will follow the existing contours of the ridge and make use of infrastructure that is already in place, such as Serpentine Road, which will lead from Sepulveda Boulevard to the Berggruen Institute’s principal entrance, thereby leaving the surrounding natural landscape undisturbed. Public hiking trails traversing the site will be maintained and enhanced and provide access to the Institute campus. Plans call for preserving approximately 415 of the 447 acres for open space.

“The Berggruen Institute’s architecture is intertwined with a specific landscape concept. The rough coastal scrubs and woodlands on the hills and ridges of the property within the Santa Monica mountain range will be juxtaposed with an abundance of specific and diverse gardened areas. The current barren ridge where the campus will be sited is transformed into a self-sustainable oasis by means of a water system within the Institute’s campus based on harvesting, collection, cleaning and re-use. Such transformative, immediate impact is also what the Institute and its fellows aim to achieve through their work on today’s most urgent concern: the economic, political and ecological imbalance in our societies between scarcity and plenty.”

The principal facility of the main campus, built at the far southern end of the site’s eastern ridge, is a horizontal structure, referred to as the Frame, which hovers 12 feet above ground level, supported by just a few elements. At its center, the Institute building features a large courtyard garden. The hovering structure frames and contains the courtyard garden while at the same time allowing for views of the city and nature beyond. Within the Frame, the Institute’s main functions of studying, living and convening are accommodated in one level with occasional mezzanine spaces. Spaces provided include live-work lofts, meeting rooms, study spaces, offices, artists’ studios, media spaces and dining and reception areas.

A sphere nestled within the open courtyard houses a 250-seat lecture hall within its base or bowl. As the tallest structure on the Berggruen Institute campus, the sphere rises approximately 45 feet above the roofline of the Frame. A second, smaller sphere, which sits atop the Frame, serves as a water storage tank. The total floor area of the Frame, including the lecture hall, is approximately 137,000 square feet. The Institute Frame accommodates a total of 26 Scholars-in-Residence units and 14 Visiting Scholars units.

To the north of the Frame, a Scholar Village occupies the central area of the Institute ridge, with approximately 26,000 square feet of residential use for scholars and guests, as well as support services and recreational facilities. A total of 15 units for scholars are built on either side of a wide, landscaped promenade, with courtyard residences recessed into the landscape. Each unit features extensive outdoor spaces including entrance courts and living gardens, designed as extensions of the indoor areas.

The third and last main area on the eastern ridge, occupying its northern end, is the site of the Chairman’s Residence, a 26,000-square-foot compound that includes a library, conference room, dining and catering facilities and staff quarters, as well as residential areas. A series of adjacent landscaped terraces blends indoor and outdoor space for this single-story structure. Immediately north of the Chairman’s Residence, a heavily landscaped area and gardens serve as a buffer zone between the Institute and the neighboring MountainGate community, 250 feet away.

Through passive measures such as the buildings’ orientation, shaded overhangs, cross ventilation and thermal mass, the need for mechanical systems is drastically reduced. In open public areas, shade tree canopies and permeable pavement for pathways and parking make for inviting and livable exterior spaces, all linked into a water management system for irrigation of the landscape and gardens. Aside from applying passive environmental strategies, the low-energy lighting systems, electric vehicle charging stations and renewable energy sources further reduce the Institute’s environmental impact.

The Institute will undertake a comprehensive planting program to mitigate the impact of construction on the site’s oaks and other protected trees as well as a riparian habitat restoration plan.

To minimize the risk of wildfires, a fuel modification plan will establish buffer zones around all structures, dictate the type of vegetation permitted and specify requirements pertaining to landscape irrigation, vegetation thinning and removal of brush, dead plant materials and non-native plant species. A helipad is included for emergency use by firefighters.

To begin creating its new campus, the Berggruen Institute has submitted the site plan by Herzog & de Meuron to the City of Los Angeles, initiating the environmental review process. 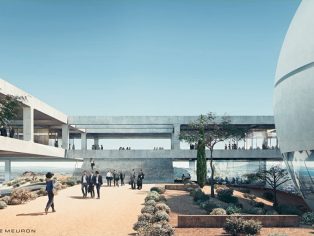