Benoy unveiled as Masterplanners for DreamCenter in Shanghai

Benoy, a world leader in Architecture, Masterplanning, Interior and Graphic Design, is proud to announce its appointment as the Masterplanner behind the recently unveiled DreamCenter in Shanghai.

DreamCenter has been released as the leading element of the ‘West Bund Media Port’ project; one of the largest cultural investment projects currently undertaken in China. Located along the Huangpu River in Shanghai’s Xuhui District, the integrated development is the result of a dynamic collaboration between Lan Kwai Fong Group, DreamWorks Animation and CMC Capital Partners.

With a land area of 152,300m2, the masterplan brings together 12 unique art, culture and entertainment venues to ignite inspiration as a cultural hub for the city. Key features include the ‘Dream Avenue’ Cultural Theatre District; Headquarters of Oriental DreamWorks which will become Asia’s top animation production base; Asia’s most iconic 500-seat IMAX Cineplex; and the exciting Lan Kwai Fong Entertainment and Lifestyle District. Eight themed outdoor plazas will work to interconnect these core hubs within the development.

“Benoy is extremely thrilled and proud to be involved with the DreamCenter masterplan that shares the vision of the West Bund Media Port. As designers we feel passionately about extending the creative realm and DreamCenter’s visionary ideal will have a tremendous impact on the cultural and creative landscape of Shanghai.”

Benoy’s dynamic and comprehensive masterplan for DreamCenter has laid the foundation for the eight international and local design firms creating the architectural identity for the scheme. Site work on the scheme spanning 463,000m2 in GFA will commence in 2014 and be completed for opening in 2017.

“We see DreamCenter as a catalyst for change in Shanghai, a development that will culturally elevate its urban setting which is very exciting. The scheme will propel Shanghai as the new hub for imagination and creativity in the country”.

Benoy is currently working with Lan Kwai Fong Group on the Lan Kwai Fong Wuxi scheme which is set to open in 2015 as a key lifestyle and entertainment destination for the lakeside city. In Shanghai, Benoy’s masterplanning capability also notably includes the future third central business district for the city, Lujiazui Qiantan Pudong. The masterplanned development is set to attract over RMB 10 billion in future investment to the area and reflects Benoy’s reputation as a leading firm trusted to shape the landscape of modern Shanghai. 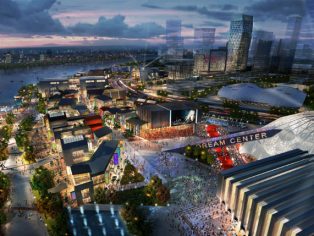 DreamCenter scheme located on the Xuhui Riverside in Shanghai