Benoy, the international firm or Architects, Masterplanners, Interior and Graphic Designers, is the Interior Designer behind the first shopping mall for developer China Vanke Co Ltd. Vanke Plaza has been welcomed in Beijing’s northwest district of Changping, home to the famous Ming Dynasty Tombs, and is celebrating its grand opening this year.

“To be chosen for this maiden development by Vanke highlights Benoy’s leadership within the international retail sector. Vanke Plaza brings international style to the capital’s new emerging area, and has established itself as a successful portfolio addition to one of China’s largest real estate developers.”

“I’m extremely proud that Vanke has built such a trendy retail mall. The interior spatial planning and design could compete with most retail projects in Beijing, or even in New York and Tokyo.”

Complementing the district’s famous tourist and natural attractions, Vanke Plaza has melded its commercial design with the local landscape.

“We wanted to incorporate natural light and a connection to the rolling mountains on the district’s horizon. The large roof skylight over the main atrium acts as a visual centrepiece for the mall. Below, the design is undulating with subtle natural references found throughout the materials. On the top level, indoor and outdoor plants sit side by side, crowning the mall in greenery.”

The design concept has also allowed the retailers to be the focal point of the interiors with a neutral colour palette and curved approach to the retail arcades. To solve the issue of connectivity, the 140,000m2 retail and leisure development utilises a central arc channel to connect the two main entrances at either end of the mall.

As an addition to Vanke Dream Town, Vanke Plaza complements the range of facilities in the Changping district, providing a vital retail centre for the local community and the regular flow of tourists to the district. On the first day of opening the development attracted more than 140,000 visitors.

Vanke Plaza follows on from the success of Benoy’s portfolio in Beijing which also includes the award-winning EAST Hotel and mixed-use INDIGO development which both opened in 2012. 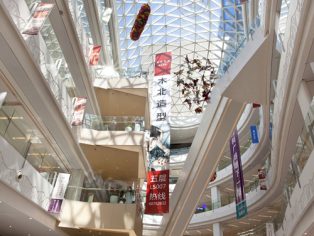