Architectural planning company Lombardini22 has announced a Lebanon HQ office project designed by L22 architects has been nominated for a MIPIM award.

Holcom HQ, which was shortlisted in the Best Office and Business Development category, is described as a “pulsating architectural system bringing together people, processes, a mission, values and dreams in a highly distinctive and representative place, all meticulously designed in every detail, functional and beautiful to live in”.

Two brands part of the Lombardini22 group took part in the project: L22 was in charge of the architectural design and art direction, and DEGW, a strategic consultancy firm, handled the space planning and interior design.

The other finalists in the category are PCA Philippe Chiambaretta Architecte’s Cloud Paris, Gensler’s Shanghai Tower and GORPROJECT and RMJM’s Evolution Tower in Moscow.

All winners will be revealed during the MIPIM Awards Ceremony in Cannes, France, on Thursday, 17 March. 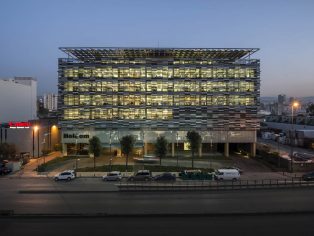