A beacon in West London for living and working

The Collective Old Oak is the world’s largest co-living space and forms a new hub for urban professionals in West London. The design by PLP architects creates a new hybrid typology, redefining the architecture of living and working to suit the unique community of people.

The building takes the form of two slim volumes sitting on a large podium and sliding across one another and centred on a central core. This central hub increases opportunities for interaction between residents, and makes circulation between floors as simple as possible. The building’s upper stories are lifted up above a public plaza facing onto the canal by a dramatic branching column in fire engine red.

A series of unique amenity spaces fills the central hub to be used by all the building’s residents. A games room, spa, secret garden, cinema, library and disco launderette, many of which are directly connected to adjacent communal kitchens, which offer facilities above the kitchens in individual units. A key element of the design is the windows at the ends of each connecting hall which provide views out over the surroundings. The building is clad in glass which reflects the lighting conditions at any given time of day. The ALUCOBOND® cladding in signal grey and mouse grey supports the modern appearance. The luminescent structure shines on the skyline as a beacon of the area’s regeneration, and as a thesis for the future of collective living. 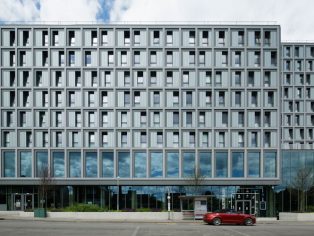