Alder Hey Children’s Hospital has won two special awards at the RIBA North West Awards including the coveted building of the year award and the sustainability award.

The judges praised the building saying:

“A hugely complex brief and a short delivery timescale were handled superbly well by the design team with an obviously tenacious and astute client team driving forward at every step.”

“If we’ve seen it before, it’s not for us” was the challenge set by the Trust’s design vision, which called for a unique paediatric environment that, together with adjacent Springfield Park, would form an integrated children’s healthpark. The Trust also set a target of achieving BREEAM Excellent with the aim of becoming the most sustainable major acute hospital in the UK.

Opened in October 2015, its hilly, undulating profile has made the new building instantly recognisable, even from a distance – a striking identity that stands in deliberate contrast to the typical idea of a hospital and the institutional nature of the existing Alder Hey which it replaces.

Earlier this week the building also won 3rd prize at the NVTG Building Awards given by the International Federation of Hospital Engineering. 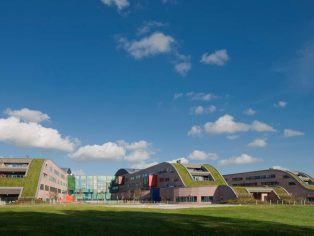