BDP has won the competition to design the new bus station in Gloucester which will be built as the initial phase of Stanhope’s Kings Quarter retail development. BDP beat Roberts Limbrick and AHR (Aedas) in the final stages of the competition, and was one of over 70 practices to submit expressions of interest.

The brief was to deliver a functional and yet architecturally stunning bus station within budget constraints and integrate it into the proposed retail scheme with improved pedestrian links to the railway station and city centre.

“We are delighted to win this high profile competition. Our design proposes a single roof plane which resembles an aircraft wing and is intended to be a reference to Gloucester’s unique aviation history as well as providing a dramatic and iconic structural form. The wing also has an aerofoil section and is punctuated at various points to allow light penetration to the concourse and bus stands.”

The £6.4m facility will include bus stands for 12 vehicles arranged in chevron format to allow a DIRO (drive in, reverse out) method of operation. The public concourse is separated by a full height glazed facade which will have automatically controlled doors allowing access to waiting buses.

The building is highly transparent in order to provide maximum visual contact with its surroundings and a calm, airy environment. The width of the public concourse will allow sufficient circulation space as well as waiting and seating areas for individual stands. Passenger information systems, timetable displays and interactive information points will also form part of the facilities.

BDP are partnered by AECOM (transport consultants) and Consensus who will be facilitating the public consultation process. A planning application is expected to be made by the beginning of August 2015. It is hoped work will start in spring 2016 and will be completed within 12 months. 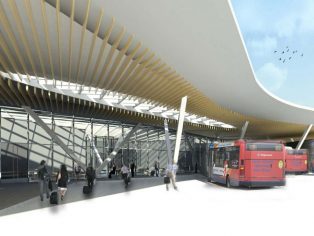