BDG architecture + design has been appointed to design the new campus for WPP in Detroit.

The historic Marquette Building in downtown Detroit has been announced at WPP’s latest co-location campus, allowing the company to benefit from and contribute to ongoing economic and cultural regeneration of the city.

The building is located at 243 West Congress Street in the heart of thriving downtown Detroit. It was built in 1905, named after Jacques Marquette the French explorer who led an expedition to map the Mississippi River in 1673. A listed building, it was saved from demolition in 1979 and restored in 1982.

The Detroit project, which has a target of reaching a “Gold” LEED rating, is the latest appointment for BDG, who have created a succession of award winning, landmark co-location projects for WPP, most recently in Amsterdam, Lisbon, Paris and Madrid. 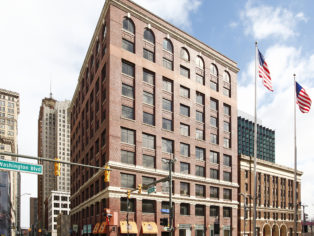