Within this new phase of properties are one, two and three bed apartments. The style of Mariner’s Quarter is distinct but complementary to the Georgian-inspired features which prevail throughout Royal Wharf. The pinnacle of the new release is the Marco Polo building, which features three vertically stacked building boxes, made striking by a subtle twist of each box.

The apartments have generously proportioned kitchen and living areas, floor to ceiling windows that offer an abundance of natural light and expansive views over the Thames Barrier or the O2.

Royal Wharf will create an entirely new community, with a network of interconnecting streets leading onto town squares and gardens, including Sovereign Place – the development’s Marylebone style high street and focal point. Sovereign Place will provide independent cafes, shops, restaurants and bars for residents and locals alike and a deal has just been signed to provide a 3,900 sqft Sainsbury’s at the heart of this retail offering.

Located on the riverfront, Royal Wharf is inspired by the energy of the River Thames and the area’s maritime heritage. Residents will be able to step out of their apartments onto the 500m of riverfront promenade or the development’s own 2.4 acre park and into the two riverside parks which border the development – Thames Barrier Park and Lyle Park. Residents of Mariner’s Quarter can benefit from the extensive open space and parkland at Royal Wharf, with 45% of the development devoted to green space.

The 2.4 acre park forms the heart of the new neighbourhood and there will also be pocket parks, garden squares and tree lined avenues. Alongside the development’s 20,000sqft David Morley Architects designed leisure facility and the riverfront promenade, these open spaces will help to create a sense of wellbeing among residents.

Mariner’s Quarter at Royal Wharf has outstanding transport connections to central London, whilst allowing residents to embrace village-style living. Transport links from Pontoon Dock and West Silvertown on the DLR and Canning Town on the Jubilee Line will enable residents to reach the West End in 20 minutes, Canary Wharf in five minutes and London City Airport in two minutes.

In 2018 a new Crossrail station at Custom House will mean that residents can reach Heathrow Airport in just 41 minutes and the West End in 15 minutes. In addition, the Emirates Air Line, London’s only cross-river cable car, is a short walk away. 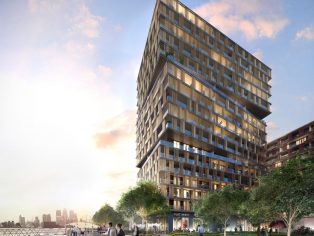