Reflecting the mining industry it represents through its architecture is at the heart of a new building in Adelaide.

The South Australia Drill Core Reference Library will hold 7.5 million metres of drill core samples collected over 130 years of exploration from across South Australia and has the capacity to display up to over one mile of cores for inspection on a series of automated conveyor belts in the main viewing area.

Leading practice architectural design and engineering has combined to integrate function with striking form that honours the origins and visual characteristics of drill core.

The building, which opened on February 17, also features conference rooms and a 3D viewing room, which uses virtual reality technology to give geologists a worms-eye view of geology and mineral deposits under the earth’s surface.

The library brings together samples previously stored at four separate drill core libraries spread across South Australia. The vast collection is midway through the shift into the massive storage warehouse at the rear of the building, featuring eight seemingly never-ending aisles that reach to the high ceiling.

A hi-tech turret truck and forklift are used to fetch requested core samples to be brought to the main viewing area for inspection.

Architects Thomson Rossi were key partners in the South Australian Government to prepare a business case to look at the fundamental economics of such a project in 2011 and worked with multi-disciplinary engineering firm Aurecon before an advanced business case was commissioned in 2013.

Funding for the project was approved in 2014 with construction starting in January 2015 and completed in December 2015.

The $19.8 million building is divided into three sections – administration, library and logistics – and has a total floor area of 7470sq m.

Thomson Rossi Director Simon Thomson said the firm was able to engage with the client from an early stage to establish the overarching design principals of vision, inspiration and iconography.

The library is located in the Tonsley precinct, the site of a former Mitsubishi car manufacturing plant, which has been converted into a modern hub for high-value industries.

Thomson said the “long and skinny” site at Tonsley was ideal because it had access to high-speed internet, was part of a hub focused on innovation and would provide a catalyst for other mining related companies to set up in the precinct.

“It ticked a lot of boxes – it’s easy to access from the airport and there’s a lot happening on the site to make it an interesting place to be,” he said.

“The vision of what this building actually should be was that it should be a beacon, it should be experiential and it should represent world’s best practice.

“The previous (South Australian) drill core library had been rated the second best facility of its type in the world so we wanted to build on that and make the new one the best,” he said. “So as a beacon we saw it as a signpost for South Australian mining ambition and a chance to establish an exciting and iconic brand for mining in South Australia.”

Exploration companies in South Australia are required by legislation to provide the Department of State Development samples of any core and cuttings taken during tenure. Core and cuttings are stored in the Drill Core Reference Library.

Thomson said the experience the firm wanted to create was of a world-class facility ensuring a positive impression for visitors.

“The other part of the experience was that it needed to be able to be used as an educational tool for university and school students,” he said.

“The building had to reflect the best practice in core libraries and embrace new technology and research in a collaborative environment.”

Thomson said images on the themes of mining, outback, geology and the imagery of the drill cores themselves were used to provide inspiration for the design and look of the building.

“The images we looked at varied from rocky outcrops to open cut mining sites, aerial photography of outback areas and the drill cores themselves laid out in their trays,” he said.

“The last thing that we wanted to see was something that looked like an office warehouse with a separate fancy building with a big shed out the back because the collection is of such importance to the state – the estimated cost to replace the collection runs into the billions of dollars.”

Thomson said he wanted to have a similar set up to many wineries that have an area for reception and visitors at the front, processing of the product in the middle and storage at the rear of the building was also taken into consideration.

“We wanted to have a similar functionality,” he said.

“We thought it was very important that the building presented as a whole as a public building but we did have this big section that is pretty much a non-public storage area so we came up with the idea that the building basically morphed from one end to the other in a gradual manner, it’s almost like what you find when you are looking at a drill core.”

The front section of the building is clad in COR-TEN steel sheets that have a rusted iron look.

“In itself the whole building is very solid and heavy and looking like a rock and then it was a matter of how we create the articulation of that façade to further enhance the idea of metamorphic pressures,” Thomson said.

“In an abstract way we are trying to reflect the geology that this building is all about. Using the COR-TEN steel sheeting, which basically just rusts, it’s all about creating a building that is very raw as the raw materials of mining are but also from a pragmatic sense it’s recognizing that governments don’t have a lot of money to spend on maintenance so it’s a wonderful material that you never have to maintain and it continues to change as the building ages.”

“It was all about trying to encapsulate the essence of mining and mining products in the form of a building and create something that’s dramatic and stands out like a signpost and a beacon – something you couldn’t really miss when you are entering the (Tonsley) site,” he said.

“There are some quite raw elements inside as well. We’ve used things like the polished concrete where you can see the aggregate, the carpet in certain sections is like looking at an aerial map of outback South Australia. We’ve got exposed ducting and perforated steel sheet that’s bolted together that forms the staircases so it’s that kind of a rough industrial look you might find on a mining site.

“At the same time we’ve made it a very convivial environment.”

The building has several meeting and conference rooms of varying sizes, a kitchen area, laboratory and a lobby area to welcome visitors upon entry.

“We used the comparison to a Qantas Club type scenario – there are facilities there that help people do business on site to make things as easy as possible.”

Thomson Rossi has worked on a broad portfolio of projects in the past including schools, tertiary buildings, prisons, industrial, laboratories and residential.

“This was one of those unique projects that really required pure problem solving techniques because there weren’t really any precedents,” Thomson said.

“But we were drawing on all of the streams that we’ve been involved with.

“The comments that we’ve had to date have been extremely complimentary and people from the industry are really excited about it.” 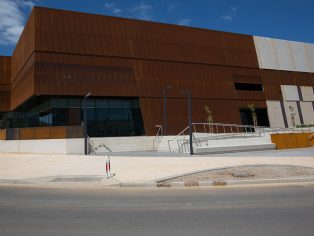