The four-storey, 45,000 ft² Grade A office scheme on 6 Cardigan street has been let to Birmingham City University.

The building was named The Joseph Priestley Building after the former Birmingham resident and scientist.

“This is a hugely significant step in an ongoing project to regenerate a key canalside location and breathe new life into this area of the city.

“The completion of this first phase now paves the way for the continued transformation of this important site into a thriving destination for people to work, live and enjoy themselves.”

The  development features an oversailing cantilevered corner on the southwest side of the building, which forms the main entrance and addresses the primary approach to the site from Eastside City Park.

The facade comprises continuous curtain walling, articulated with vertical glazed ceramic fins, which are separated by a strong, horizontal elements in glass reinforced concrete, while individual window bays are further articulated by vertical and horizontal back painted panels. Escape stairs clad in perforated aluminium create contrasting solid forms which anchor the building composition on the north and east approaches.

Inside the building, the floor plans are U-shaped, and face onto a semi-public courtyard at the east side. Open-plan floors allow for maximum flexibility and each level can be easily sub-divided if required.

The next phase of Eastside Locks – a landmark city development close to the planned HS2 rail station – includes the restoration of the historic Belmont Works  as well as No8 Cardigan Street adjacent to the Joseph Priestley Building.

“The Eastside Locks masterplan will involve regeneration within a particular opportunity zone but also witness a wider shift in the centre of gravity for Birmingham as a whole.

“The individual projects on the site, such the John Priestley Building, demonstrate how the working landscape of the whole city is changing in the near future and we’re delighted to be a part of it.” 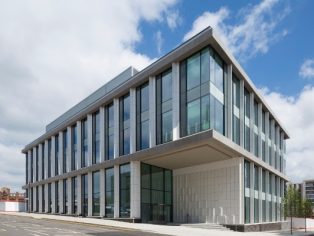 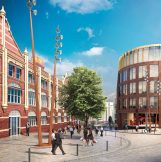