Atkins has been awarded two multimillion-dollar contracts to assist with modernising the MacArthur Short and Long Barracks at the US Military Academy in West Point, New York. The projects are part of the Cadet Barracks Upgrade Program, which aims to improve all existing barracks facilities at West Point. The new assignments fall under Atkins’ ongoing architecture-engineering services contract with the US National Guard Bureau.

“Atkins received this award largely due to our exemplary performance on several recent assignments at West Point, including the development of a 35 per cent design-build request for proposals package for the Scott Barracks renovation and modernisation.”

The $53.8 million wall-to-wall renovation of West Point’s historic Scott Barracks, built in the 1930s, involves complex upgrades to meet current codes and replace outdated building systems. Energy saving measures incorporated into the Scott Barracks renovation – designed to achieve Leadership in Energy and Environmental Design (LEED) Silver certification from the US Green Building Council – add up to an estimated 30 per cent reduction in annual energy costs. High-efficiency, low-flow fixtures used throughout the building will also reduce water use by over 40 per cent, which amounts to nearly a million gallons of water saved per year.

MacArthur Barracks, another of nine existing historic cadet barracks at West Point, must also be modernised to meet current Army standards and to correct deficiencies such as overcrowding and deterioration. Originally constructed in 1961, the facility was named in honour of General of the Army Douglas MacArthur – a West Point graduate in 1903, former Superintendent of the US Military Academy (1919-22), General of the Army during World War II, and a recipient of the US Medal of Honor.

Atkins’ services for the MacArthur Barracks include preparing a complete design package to solicit a contractor for the construction. Atkins will also provide on-site construction management services during construction.

To coordinate the projects within the larger Cadet Barracks Upgrade Program, Atkins is using 4D visual integration support (VIS) technology, a web-based collaboration platform developed by Atkins that helps to streamline decision making for complex program management and master planning efforts. Using Google Earth maps as a foundation layer, the application builds additional layers of information such as building locations, road networks, utilities, and construction schedules. By enabling close-up views of precise locations and all program­matic data and construction activity in one application, 4D VIS minimizes the risk of conflict and duplication of efforts, saving time and money. 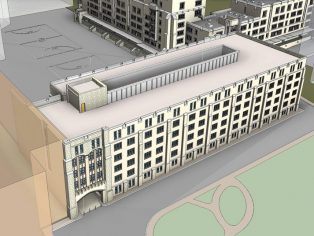