Why did you become an architect?

I was going to be a furniture designer and maker. But, in making things, I became intrigued how materials can be shaped to form an enclosure and then affect people’s experience. Aged six, my participation in making a house in Bolgatanga, northern Ghana, was a formative experience where I learned about the plastic arts through working with muddy clay and later, playing with molten wax. Changing and transforming solids and liquids are also a common theme. Defying gravity was something I was keen on, too – with sticks (dens and tree houses) and stones (dry stone walls). And there was Lego, of course. I had also read Small is Beautiful by E.F. Schumacher at an impressionable age: I could see that the status quo was not the only way. All in all, architecture seemed to offer an opportunity to pursue a positive alternative.

Making a qualitative difference to the built environment, especially as a specialist healthcare architect, where a therapeutic environment can most tangibly affect someone’s well-being. When it goes right, it is very gratifying. We recently completed Clock View Hospital, north Liverpool. It’s a psychiatric hospital placed within the heart of a community rather than at its edge. It deliberately de-stigmatises mental health by making access to, and discharge from, the hospital that much easier for a local population. We designed a building with achievable thresholds to recovery. A great deal is done to bring this about – through extensive soft landscaping, the views, and access.

What is your proudest achievement and why?

I don’t think I have one yet. I am still trying. There are little bits of projects that are delightful and some whole projects that come close. Before joining Medical Architecture I was a partner at Penoyre & Prasad LLP and while there, worked on some projects that I was proud of. One was the Millennium Centre in Dagenham. It was a fun, Millennium Commission-funded project for the local authority. It had a wonderful client – Jan Britton – who pushed the ‘what if’ and ‘why not’ agenda to the limit. The building had to be didactic about treading on the earth lightly. This was at a time at the end of the last century before greenwash became prevalent, when it felt like we were setting the agenda trying to find a green solution in a very grey world.

The race to the bottom with fee percentages. Winning work that is interesting to do, and is actually deliverable for the fee, is a constant challenge. We have great committed staff with superb skills and rely on them enormously to keep on making it happen. We do a lot of bidding in the public sector – inescapable as a UK-based healthcare specialist firm – and the hoops we have to jump through are getting smaller and more misshapen than ever. Getting on to frameworks is tough; and, once you’re on them, competing again at every stage can be frustrating. That said, our global reputation is such that we do still occasionally get a phone call out of the blue that leads to great things.

What single change/innovation would make an architect’s job simpler?

What is your favourite medium?

A stick in the sand or a pencil stub on the back of an envelope. Then again, a felt tip on anything. I find this is the fastest way to communicate and problem-solve. Deeper analysis and testing with more sophisticated tools can follow on, rather than lead the process of resolving an idea. A blue-leaded clutch pencil remains a favourite.

What can we learn from foreign architects?

Architecture is a global profession. When I worked in France and India I was a foreign architect myself. We can all learn so much from each other, wherever we are from, as we bring our own perspectives. You learn to take nothing for granted. I had the good fortune to meet and work with a number of so-called ‘foreign’ architects. There’s a general sense that we all come from everywhere and enjoy the ‘other-ness’ of each other. At Medical Architecture we often partner architects in other countries. Learning to respect other people’s time zones is key, especially when steaming through production information jointly with an Australian partner office. You have to be careful to understand which day it actually is and be prepared to start early and/or finish late!

What will be the next big thing in the industry?

Definitely graphene: that’s what a lot of people think, anyway. It is one of those things that always seems to be five to 10 years away from being commercially viable and yet is still packed with potential. I have more of a wish-list than a prediction in answer to this question. I think that materials science will have to move the Cradle-to-Cradle (C2C) agenda on to a position where we no longer poison the planet. Why is it so difficult to engineer polymers to be nourishing rather than toxic? Is PVC the next asbestos as some people claim? Will there be a new way of recovering the microscopic particles being ingested by marine animals? Steven Groak wrote in The Idea of Building that buildings are temporary reservoirs of matter that eventually flow into the sea. It is true. We need to re-think this.

How do you see the architect’s role changing?

We will become designers of processes that yield a long-term beauty, rather than the designers of things that are beautiful just when the photographs are taken. Maurice Mitchell is professor of architecture of Rapid Change and Scarce Resources at the CASS School, London Metropolitan University, and a friend, mentor, tutor and ex-employer. I think he and his colleagues are pointing a new generation of architectural thinkers in a good direction. They are pointing them towards a role as explorer and enabler – solving everyday problems. The architect’s role is changing for sure and we need to remain agile. There are as many ways of being an architect as there are architects.

Are there limits to the part technology can play?

No – although, given the infinity of possibility, I do wonder what part regulation will play. As more and more seems possible, there is a counter-balancing need to regulate the excesses that may occur. I come back to the two questions I always ask myself when designing: “Is it necessary?” and “Is it sufficient?”

I recently attended a RIBA event where the offsite school presented an overlay of the RIBA Plan of Work 2013 – Designing for Manufacture and Assembly (DfMA). We have been doing this at Medical Architecture for a few years now, led by contractors – or ‘providers of engineering solutions’ as they now prefer to be known. We have to imagine that buildings might soon be delivered by DHL or FedEx and assembled by robots and drones. Sending it back for a refund because ‘it doesn’t fit’ or ‘you don’t like the colour’ could be expensive. So, we’ll need to design it right first time or think about throwaway (non-toxic) buildings and easily-recycled buildings. There is another question I often ask myself: “Just because you can do it, should you?”

What are your hopes for the next 12 months?

Having good, exciting work to carry out and puzzles to solve. Who could ask for anything more? 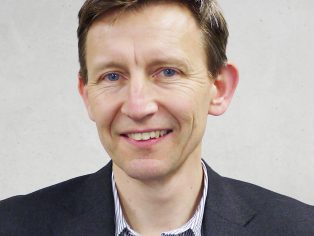