Benoy, the award-winning firm of Architects, Masterplanners, Interior and Graphic Designers, has celebrated the opening of South Korea’s largest shopping centre, LOTTE World Mall in Seoul this October. Benoy was the Interior Architect for the ground breaking retail scheme and Façade Concept Designer for the adjoining Avenuel department store, the third largest duty free store in the world.

Opening in the thriving capital of South Korea, LOTTE World Mall has been welcomed as a high-profile addition to the commercial property sector. Seamlessly integrated to a high-end department store, entertainment tower and world-class concert hall, the retail development has established a shopping and entertainment destination to elevate Seoul’s exciting megacity of ten million and its booming tourism industry.

“LOTTE World Mall is the most significant development undertaken by Benoy in South Korea.”

“We approached the scheme not only as a major shopping destination for the country, but as a tourist attraction for Asia.”

Benoy’s Interior Design has captured the significance of the development, introducing innovative and interactive features not yet seen on the same scale in the country. Sculptural GRG ceilings, illuminated timber walls, prominent motif lighting and pocket outdoor gardens have added to the profile of the development as a modern city landmark.

“Given the scale of LOTTE World Mall, the design of the public areas, the areas where people naturally converge, was critical. We featured a number of design elements to ensure that these spaces were memorable and unique. For instance, the main atrium is dressed in a distinctive material, allowing us to create a geometry which would’ve been hard to achieve using traditional methods.”

LOTTE World Mall presents an impressive line-up of features including the country’s largest aquarium with more than 650 species and a 21-screen cinema which includes the world’s biggest screen. Combined, the Avenuel department store, with more brands than any other in the country, and the retail mall have attracted over 970 brands, 20 of which have made their debut in South Korea.

Given Benoy’s appointment and multi-disciplinary scope for the overall scheme, the firm established an on-site team led by Associate Director Heeri Song to oversee the construction and fit out of the development for over 12 months.

Benoy’s first foray into leading retail schemes in the country was with Seoul IFC Mall. Opening in 2012, the development changed the way Korean’s experienced shopping with the design of the three-storey subterranean mall heavily introducing natural light and sense of space into the retail experience.

“Korea is an expanding market for Benoy and one which our studios in both the East and West have had exposure to. Working alongside LOTTE Corporation on their landmark scheme has allowed Benoy to showcase once again its ingenuity for design in different markets and adaptability to create schemes which resonate with their local audience.” 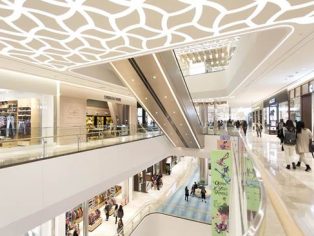