The Royal Institute of British Architects (RIBA) is warning of the economic consequences of a bad or no deal Brexit for the architecture sector in a new report Global Talent, Global Reach, released on 7 December 2017.

This new research shows that the UK’s world-leading architecture sector is particularly exposed to changes on the global stage because of its pre-eminent position as an exporter and its reliance on international talent. However, this means that there could also be new opportunities if UK Government takes the right approach to retaining and attracting skilled architects and strikes key trade deals.

British architecture practices work around the world, producing transformative and technologically advanced buildings that improve the lives of their occupants and communities. They excel in exporting design excellence across the world, from Norman Foster + Partners’ Apple Park in California to John McAslan + Partners’ Kericho Cathedral in Kenya, the BBVA Bancomer Tower in Mexico City by Rogers Stirk Harbour + Partners and Zaha Hadid Architects Antwerp Port House in Belgium – British based architects are creating ground-breaking buildings on every continent and setting standards for excellence around the world.

The RIBA is urging the Government to take immediate steps to protect the British architecture industry during Brexit negotiations, calling for:

“Without a Brexit deal that works for UK architecture we risk losing more of our global talent due to increased costs and economic uncertainty. A no deal Brexit is not an option; it would be a disaster for UK architecture and our built environment, and the Government must take this option off the table. This means remaining open to the best and brightest talent from around the world and a new trade relationship with the EU and the rest of the world. Anything less will lead to a skills exodus, higher costs across the industry and the failure to deliver domestic policies on housing, infrastructure and the industrial strategy all of which rely on our being open for business to international design talent.”

“British architects are the most respected and admired in the world, but we can’t take this success and our £4.8bn contribution to UK economy for granted. Brexit poses a real threat to the professions’ future prosperity. The UK Government must make assurances to safeguard our profession post-Brexit by ensuring our members have full access to talent from across the EU and around the world. I want to maintain and build upon London and the UK’s reputation as a global architecture talent hub, attracting the brightest from around the world.” 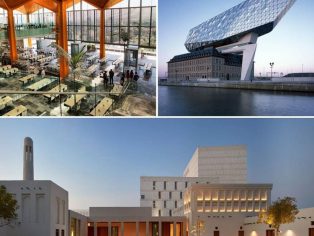