Architecture Visionaries by Richard Weston and published by Laurence King in August 2015 presents the story of 20th-century architecture through the fascinating personal stories and significant works that have shaped the field.

Arranged in a broadly chronological order, Architecture Visionaries reveals the impact that 75 of the world’s most influential architects have had on the development of our built environment. Key dates are listed in career timelines, allowing us to understand how their masterpieces directly influenced the world around us.

With insightful text and stunning visual examples, this is an ideal introduction to the great names of 20th-century architecture. Key works include Gaudi’s Sagrada Familia, Adolf Loos’s Müller House in Prague, Behnisch’s Munich Olympic Park and Norman Foster’s Hongkong and Shanghai Bank. Contemporary work such as Daniel Libeskind’s design for the Jewish Museum in Berlin, is also included, as well as Santiago Calatrava’s ingenious Turning Torso apartment tower in Sweden, which resembles a vast spinal column.

Individually selected by architecture expert Richard Weston, these 75 architects have been chosen for their pioneering work and for the diversity that they have introduced to field. This book is the perfect introduction to architecture for students and a source of inspiration for established practitioners.

Also available in the ‘Visionaries’ series: 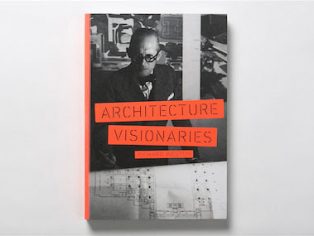