Architecture students at the University of Portsmouth have been awarded £500 each by local business and landowners, BST Properties Limited, for their work on a proposed new town near Fareham, Hampshire.

As part of their masters course, the seven students have been working on theoretical plans for Welborne, a proposed new 6,500 home town. Representatives from BST, the landowners of the southern half of the site, visited the students earlier in the year and were so impressed with the plans that they decided to return with some prize money.

The students presented their detailed ideas and plans surrounded by models and designs of both their group work and individual buildings. Their plans concentrated heavily on the agricultural aspect of the area, and on sustainability and healthy living. There was a great emphasis on renewable energy, public green spaces and the creation of an identity based around a central market square.

BST representatives said they were deeply impressed by the effort and thought that had gone into the plans, and the students were congratulated for the high standard of work. The cash prize will go towards reimbursing the students for the costs of the project.

A BST representative said that if the students decide to continue their careers and stay in the area, then the local residents would be extraordinarily well served.

Although the plans are purely theoretical, the students were overwhelmed to have their work recognised by those who are working on the real life plans.

“It’s great to see a project which we’ve put so much effort into be recognised by real peers, it doesn’t happen often. The prize money is an added bonus!”

The event was also attended by a member of Fareham Borough Council, Sean Woodward, who said he was grateful to the students for all their hard work and effort that had gone into their plans.

“The important point to take away from this is that our students’ work has been recognised by a real life client. It has proven the students’ capability and the tremendous professional value of their work.”

“This project has been a very intense process for the students, they did incredibly well and we couldn’t have asked for a better ending to the unit. To be able to present their work to a panel of experts of this calibre is a fantastic opportunity and will help prepare them for their employment after university. We are all extremely proud of them.”

Since the event the students have been invited to participate in further discussions about their plans with the landowners. 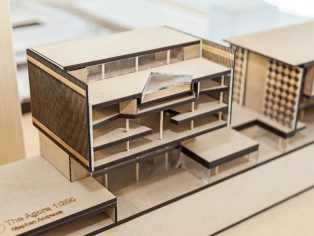 An example of the students work