Their unique properties offer many benefits for architectural design, but applications in the construction sector have so far been limited by the cost of manufacture, using moulds to form repeat elements.

But what if a carbon-fibre building could be created without the need for moulds, using the external structure itself as formwork? If that were possible it could open up entirely new and exciting possibilities for architecture and construction.

That was the question posed by a multidisciplinary research team from the University of Stuttgart’s Institute for Computational Design (ICD) and Institute of Building Structures and Structural Design (ITKE), when designing the University’s innovative 2014-2015 Research Pavilion.

The prototype structure, a semi-transparent ETFE dome criss-crossed with lines of carbon fibre reinforcement, is the result of a one-and-a-half year development project by the team of researchers and students in architecture, engineering and natural sciences. The 7.5m-wide, 4.1m-high dome covers an area of about 40m2 and is one of several prototype structures that have been developed by ICD/ITKE to explore the application of novel computational design, simulation and fabrication processes in architecture.

The design for the Pavilion has its roots in the natural world, where many robust and material-efficient construction processes for fibre-reinforced structures have been observed.

“Our team of Masters students was exploring biological role models that utilise natural fibrous materials and the web building process of the diving bell water spider (Agyroneda Aquatica) emerged as particularly interesting. We wanted to integrate an enclosure layer as formwork for the structure and the spider’s unique behaviour showed how it could be done.”

The water spider is found in freshwater ponds and streams in northern and central Europe and northern Asia and spends most of its life under water, for which it constructs a reinforced air bubble to survive. The creature extrudes a horizontal sheet web, under which the air bubble is placed, then it sequentially reinforces the bubble by laying a hierarchical arrangement of fibres from within. The result is a stable construction able to withstand mechanical stresses, such as changing water currents, providing a safe and stable habitat for the spider.

The ICD/ITKE team analysed web construction processes and underlying behavioral patterns of different water spiders to form a set of design rules, which were then abstracted and transferred into a human-scale technological fabrication process.

The spider took the form of a KUKA six-axis industrial robot, fitted with a custom end effector (a custom-designed robot “wrist” designed to interact with the environment) designed to lay the carbon fibre material and perform various other functions. The robot was placed within an inflated membrane envelope, made of ETFE. The soft ETFE was initially only supported by air pressure, but by robotically reinforcing the interior surface with strips of carbon fibre, it was gradually stiffened to form a self-supporting monocoque structure.

Thus, the ETFE acts simultaneously as pneumatic formwork for construction and becomes part of the building skin, resulting in a highly resource efficient construction process requiring no moulds or temporary support during fabrication.

A computational agent-based design method was developed to determine and adjust the specific layouts and orientations of carbon fibre bundles needed to structurally reinforce the shell. The digital agent’s behaviour was programmed to mirror the movements of a real spider, navigating the surface shell geometry to generate a proposed robot path for carbon fibre placement.

“There were several constraints on how the fibres could be laid; structural analysis of the form revealed how it would perform under a compression load and the related structural requirements, such as the density of fibres needed in different areas,” said Prado. “In addition, buckling analysis helped determine the directions the fibres should be aligned.”

The pneumatic ETFE formwork was inherently flexible and deformations during fibre placement posed a particular challenge to controlling the robot. To help it adapt to surface movements during production, a sensor system embedded into the end of the robot’s effector, and integrated into the robot control system, recorded its current position and contact force in real time.

This adaptive “cyber-physical” system enabled constant feedback between the actual production conditions and the digital generation of robot control codes.

Prado comments: “The sensor measured the force of the robot against the membrane, which allowed the computer to control the level of force it applied by feeding that information back to the robot control system (if it was pushing too hard, the robot could back off a little, if it was not pushing hard enough, the robot could move forward). By slowly tweaking the system along the way it could autonomously adapt its movements.”

Working out how to stick the carbon fibre bundles to the ETFE posed another challenge. The robot’s extrusion system was fitted with a motor to sync extrusion precisely to the speed of the robot’s movement. However, the surface of the membrane was so delicate that any additional tension on the system, caused by using too strong adhesive, would have pulled the fibre off. In addition, ETFE is commonly used in roofing or cladding applications and as such has self cleaning properties, making it harder to stick to.

“We explored different glue products and activation techniques that would allow the fibres to stick without causing too much tension or interfere with the fibre matrix, eventually settling on a composite spray adhesive,” says Prado. “The robot’s end effector incorporates a spray gun that sprayed the adhesive in sync with the speed of the robot’s movement.”

Testing different types of glue, the amount of time they took to become tacky, and calibrating the robot’s path and movement, took several months of trial and error.

When the project went into production nine carbon fibre rovings (a long and narrow bundle of fibre) were placed by the robot in parallel. As successive fibres were set in place, the dome became gradually stiffer until the team was satisfied that the structure could support itself. A total 45km of roving was laid to complete the structure at an average speed of 0.6 metres per minute.

“We ended up with a very strong, light and weatherproof structure,” said Prado. “It is the most structurally efficient fibre structure among the three pavilions the University has completed so far. It is also the largest and lightest, weighing just 260kg, or 6.5kg / m², light enough for the students to carry by hand from the fabrication facility to the site.”

According to ICD/ITKE, the high degree of functional integration achieved by using ETFE film as both pneumatic formwork and building envelope, helped reduce materials consumption, compared to conventional formwork techniques, and eliminated the need for an additional facade installation.

But the innovations don’t stop there, Prado says the project resulted in an unexpected application when the structure was later adapted to function as a giant speaker cone: “The ETFE membrane is tightly stretched and held in tension. One of our partner institutes had the idea of attaching magnetic resonators to the surface to transform the entire structure into a speaker. They demonstrated how to turn a building into a speaker, sound fills the whole space, making it impossible to tell where a sound is coming from because the venue IS the sound.” It’s another feat of engineering inspired by the humble water spider and its spherical sub-aquatic home. 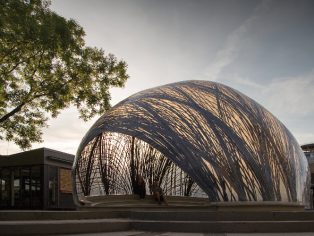